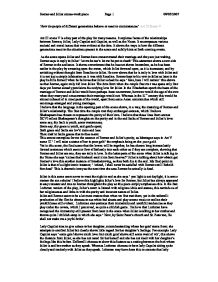 Romeo and juliet.Act III scene V is a key part of the play for many reasons

'How do people of different generations behave or react to circumstances' Act III Scene V Act III scene V is a key part of the play for many reasons. It explores facets of the relationships between Romeo, Juliet, Lady Capulet and Capulet, as well as the Nurse. It encompasses various societal and moral issues that were evident at the time. It shows the ways in how the different generations react to the situations present in the scene and subtly hints at forth-coming events. As the scene opens Juliet and Romeo have consummated their marriage and they are just waking. Romeo says in reply to Juliet ' let me be tae'n let me be put to death' This statement shows a new side of Romeo to the audience. It shows commitment that he has not shown heretofore, as he has been earlier in the play by swearing upon the moon, which Juliet frowned upon, as it is inconstant, and by switching without thought from Rosaline to Juliet. He now shows that he is truly in love with Juliet and it is not just a simple infatuation as it was with Rosaline. Romeo kept to his vow to Juliet as later in the play he kills himself when he believes that Juliet is dead he says ' here, here I will remain' this shows us that Romeo, again truly did love Juliet. ...read more.

Peter too, He shall not make me a joyful bride'. Lady Capulet tries to give solace to her daughter, misunderstanding where her grief stems from; she attempts to comfort Juliet but clearly shows little regard for her daughter's feelings. For example Lady Capulet says ' some grief shows much love: but much grief shows still some want of wit', this shows the distance from Juliet, as she has not cared for her herself and she has not dealt with her daughter's feelings like this before. Zefferrelli chooses to show this distance as a netting between the bed where Juliet is and her mother as they speak. Whereas Lurhman chooses to have lady Capulet sitting quite closely and tenderly with Juliet as they speak. Luhrman may have done this to connote that lady Capulet did make some attempt to console Juliet, or he may have wanted the audience to focus more on the dialogue. In the 15th century this removed feeling between mother and daughter would have been the norm for upper class wealthy families, as they would have employed somebody to look after the child from birth. To relate this to the 21st century would be to relate it to businesswomen or women with an other auspicious career that allows little time to converse with their children. Lady Capulet is very anxious to marry off Juliet, this may have something to do with her situation at Juliet's age, and she was married off at a very young age and was pregnant by 13. ...read more.

Baz Luhrman chooses to play on this crude side by showing her 'eyeing up' Romeo when he falls out of bed. Even though the Nurse usually gives a 'words of joy' to Juliet, she holds herself back in this scene and goes along with what Capulet and Lady Capulet are suggesting as in the end the Capulets are the people who are actually paying her wage and keeping her alive, in the Baz Luhrman production, he shows the nurse to have an eastern European accent, as this is the norm for nanny's in the 21st century. She seems to go along with the Capulets with some reluctance as shown in the Zefferrelli production by her making the sign of the cross before speaking to Juliet. In conclusion, I believe Shakespeare had very modern views on women, class and arranged marriages. He shows throughout the way different generations react to different situations. I believe he was trying to put across these views through ' Romeo and Juliet', but without being bias or too trenchant of the views of the time. Many of the messages that he portrayed can be carried through to today's society, for they are not confined to one era of mankind but show us the common traits of humanity itself. This is the reason we can relate to the play on so many levels and with such ease. ?? ?? ?? ?? Romeo and Juliet course-work piece Page 1 09/05/2007 ...read more.