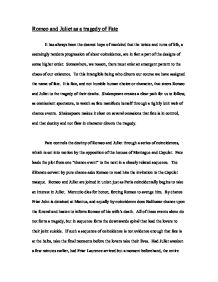 Romeo and Juliet as a tragedy of fate.

Romeo and Juliet as a tragedy of Fate It has always been the dearest hope of mankind that the twists and turns of life, a seemingly random progression of sheer coincidence, are in fact a part of the designs of some higher order. Somewhere, we reason, there must exist an emergent pattern to the chaos of our existence. To this intangible being who directs our course we have assigned the name of fate. It is fate, and not humble human choice or character, that steers Romeo and Juliet to the tragedy of their deaths. Shakespeare creates a clear path for us to follow, as omniscient spectators, to watch as fate manifests herself through a tightly knit web of chance events. Shakespeare makes it clear on several occasions that fate is in control, and that destiny and not flaw in character directs the tragedy. Fate controls the destiny of Romeo and Juliet through a series of coincidences, which is set into motion by the opposition of the houses of Montague and Capulet. ...read more.

In many other places does Shakespeare suggest fate to be the mover of the plot. Romeo, before attending the Capulet masque, has a vague premonition of the actions of fate. I fear too early, for my mind misgives Some consequence yet hanging in the stars Shall bitterly begin his fearful date With this night's revels, and expire the term Of a despised life closed in my breast By some vile forfeit of untimely death But he that hath the steerage of my course Direct my sail.... [I. iv. 113-120] In Romeo's eloquent statement, Shakespeare clearly indicates that fate will steer the lovers' course. Romeo again calls upon the element of destiny at the realization of what Tybalt's death encompasses. Oh, I am Fortune's fool! [III.i.142] And again when he learns of Juliet's supposed death. Is it e'en so? - Then I defy you, stars! - [V.i. 25] Another omen through which Shakespeare propagates his central theme of the inevitability of fate is the recurrence of dreams. ...read more.

Yet it is fate who pits their good intentions against one another, not a flaw in reasoning or character. Fault lies not with Friar Laurence for his haste, Friar John for his lack of perseverance, Romeo for his infatuation, or even the servant for his illiteracy. Fate, and not flaw in character, directs the tragedy. Fate mans the helm of the tragedy of Romeo and Juliet. Through a series of related coincidences, fate steers the course of the play. Each event brought about by chance contributes to the eventual outcome, and to the eventual reconciliation of the feuding families. In Romeo and Juliet, Shakespeare clearly states the central role of fate as the driving force behind the movement of the plot. Finally, through no single character can it be said that the tragedy is brought about. Fate works her will through the acts of a number of characters, on whom none can be laid blame. Fickle fate, love and bane of men, rules the storyline of Shakespeare's most well-loved tragedy. ...read more.

This is a very well written essay; however the actual analysis lacks depth and at times relevance to the question. Make sure that analysis of language, structure and form are the basis for your writing.