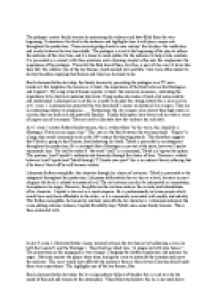 ﻿The prologue creates family tension by portraying the violence and hate-filled from the very beginning. It introduces the feud to the audience and highlights how it will play a major role throughout the production. ?From ancient grudge break to new mutiny? this displays the confliction and rivalry between the two households. The prologue is used at the beginning of the play to inform the audience of the story line, and it is done to create pathos for the audience to help evoke emotion. It is presented as a sonnet; with three quatrains and a rhyming couplet at the end, this emphasizes the importance of the prologue. ?From fort the fatal lion of these two foes, a pair of star-cross?d lover take their life? this informs you of the key themes; death marked love and fate. Stars were often related to destiny therefore implying that Romeo and Juliet are destined to die. Baz Luhrmann further develops the family tension by presenting the prologue on a TV news broadcast; this heightens the tension as it shows the importance of the feud between the Montagues and Capulet?s. ...read more.

However, the glitter on the costume reduces the severity and intimidation of his character. Capulet is dressed as a royal emperor. He is predominantly in tyrian purple which would have only been affordable to the elites, so it is commonly associated with royalty and nobility. This further exemplifies his hierarchy and how powerful he his character is. Luhrmann interprets the scene adding extreme violence; Capulet forcefully slaps Tybalt cause inner family tension. This is then contrasted with In Act 3 scene 1, Mercutio further creates tension between the two houses by bellowing a curse on both the Capulet?s and the Montage?s .Their feud has killed him. ?A plague on both your houses? The punctuation in this paragraph is very choppy. Changing the rhythm emphasizes and portrays his anger. Mercutio repeats the phrase three times during the scene to intensify the emotion and move the audience. This curse would have affected the audience them as their devout Christian belief made them very superstitious. This highlights one of the key themes; fate. Baz Luhrmann further develops this by using pathetic fallacy of thunder this is used to echo the mood of fear and add tension to the atmosphere. ...read more.

Capulet is so enraged he threatens to disown her if she refuses to marry ?Or never after look me in the face?. This was like a death penalty to women as they were unable to earn money due in the patriarchal society they lived in. An Elizabethan audience would have found this moving. It also highlights one of the key themes of the production; honour! Baz Luhrmann further develops family tension in Act 3 scene 5 through the stage directions of the mother. Lady Capulet?s fear of talking to Juliet without the Nurse present establishes her as an ineffectual mother. Tension is created due to the lack of mother and daughter relationship which is apparent throughout the production. He also includes brutal attack and violence against Juliet this highlights the inner family tension. this by using different angles with the camera. He uses a close up shot of Capulet, concentrating on his face. This highlights the expression of anger. Capulet?s strong tone of voice portrays his anger and emotion. He uses fast music to create mood and atmosphere. Baz Luhrmann has successfully modernised Shakespeare?s Romeo and Juliet for a contemporary audience. Luhrmann uses visual techniques of lighting, colour and camera angles to convey atmosphere of tension and related emotions. ...read more.