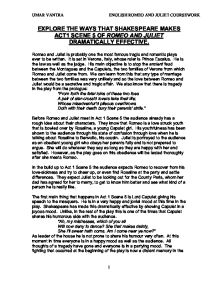 EXPLORE THE WAYS THAT SHAKESPEARE MAKES ACT1 SCENE 5 OF ROMEO AND JULIET DRAMATICALLY EFFECTIVE. Romeo and Juliet is probably one the most famous tragic and romantic plays ever to be written. It is set in Verona, Italy, whose ruler is Prince Escalus. He is the law as well as the judge. His main objective is to stop the ancient feud between the Montagues and the Capulets, the two families of Verona from which Romeo and Juliet come from. We can learn from this that any type of marriage between the two families was very unlikely and so the love between Romeo and Juliet would be a secretive and tragic affair. We also know that there is tragedy in the play from the prologue: "From forth the fatal loins of these two foes A pair of star-cross'd lovers take their life; Whose misadventur'd piteous overthrows Doth with their death bury their parents' strife." Before Romeo and Juliet meet in Act 1 Scene 5 the audience already has a rough idea about their characters. They know that Romeo is a love struck youth that is bowled over by Rosaline, a young Capulet girl. His youthfulness has been shown to the audience through his state of confusion through love when he is talking about Rosaline to Benvolio, his cousin. Juliet is portrayed to the audience as an obedient young girl who obeys her parents fully and is not prepared to argue. ...read more.

Shakespeare has made this dramatically effective by showing Romeo's feelings towards Juliet. This is because only a few scenes ago we saw Romeo drowned in his own love for a completely different girl, Rosaline. By showing that Romeo has admiration for Juliet too the audience is set to think that either Romeo is a playboy type of youth or he has, in all the partying, genuinely forgotten about Rosaline. While Romeo is busy praising Juliet's astounding beauty, Tybalt has noticed him and recognised him by his voice. He is absolutely enraged at the thought of Romeo being present at a Capulet party. He wishes to have him slain and calls for his servant to fetch his sword. The audience remembers Tybalt from Act 1 Scene 1 where he started the fight and refused to stop when Benvolio asked him to. This again is a switch of tone. It has gone from the flowery and love struck tone of Romeo to the angry and infuriated tone of Tybalt's. "This, by his voice, should be a Montague. Fetch me my rapier, boy. What dares the slave Come hither, cover'd with an antic face, To fleer and scorn at our solemnity? Now by the stock and honour of my kin, To strike him dead I hold it not a sin." Shakespeare has made this effective by introducing Tybalt back to the play. He is an infuriated character that is very short tempered and must be avoided at all times. ...read more.

After this the two lovers enquire about each other and find out that they are in love with their enemies. "Is she a Capulet? O dear account! My life is my foe's debt." Shakespeare has made this dramatically effective by leaving this right to the end. The audience is set to think in the same way as the lovers. They are thinking if the relationship will work out right and run smoothly or will the tension and pressure be too much for the lovers. There is a sense of uncertainty as to whether or not the relationship will be able to continue at all. At this point the scene ends leaving the audience in confusion. I think that Shakespeare has successfully made this scene dramatically effective by changing characters and tone throughout. The mood switched from being jovial, to serious love, to anger, back to love and then to bewilderment and fear. Shakespeare has made this scene the foundation to the whole play. We see all the emotions shared throughput the whole play in this one scene. We also see the plot of the play, which is love and hate at the same time. Even today when audiences around the world watch this play they are bound to notice the two contrasting emotions felt throughout the play. They all feel the love and the hate that is present in the play. They are the essential and ideal ingredients for a tragic and romantic play. UMAR VANTRA ENGLISH ROMEO AND JULIET COURSEWORK 1 ...read more.

The important aspects of this scene are covered and explored and there are some key interpretations covered. The most obvious change needed is the way quotes are used; they need to be embedded in the writing and then analysed for the language choices made by Shakespeare.