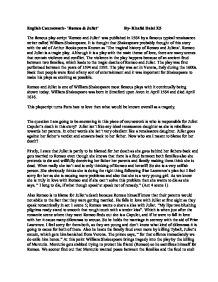 English Coursework- 'Romeo & Juliet' By- Khalid Dalal X5 The famous play-script 'Romeo and Juliet' was published in 1564 by a famous typical renaissance writer called William Shakespeare. It is thought that Shakespeare probably thought of this story with the aid of Arthur Books poem Known as 'The tragical history of Romeo and Julieta'. Romeo and Juliet is a tragic play. Although it is a play with the main theme of love, there are many scenes that contain violence and conflict. The violence in the play happens because of an ancient feud between two families, which leads to the tragic deaths of Romeo and Juliet. The play was first performed between the years of 1594 and 1595. The play was set in Verona, Italy during the 1600s. Back then people were fond of any sort of entertainment and it was important for Shakespeare to make his plays as exciting as possible. Romeo and Juliet is one of William Shakespeare most famous plays with it continually being shown today. William Shakespeare was born in Stratford upon Avon in April 1564 and died April 1616. This playscript turns from hate to love then what would be known overall as a tragedy. The question I am going to be answering in this piece of coursework is who is responsible for Juliet Capulet's death in this story? Juliet isn't like any ideal renaissance daughter as she is rebellious towards her parents. In other words she isn't very obedient like a renaissance daughter. Juliet goes against her father's verdict and answers back to her father. Now who am I meant to blame for her death? Firstly, I state that Juliet is partly to be blamed for her death as she goes behind her fathers back and gets married to Romeo even though ...read more.

As he was very upset at the beginning of the play and they did little much to aid him. In their crisis, Romeo and Juliet seek guidance and consultation from the local Franciscan friar in their town of Verona, Friar Lawrence. Many people consider Friar Lawrence to be a wise and intelligent man and offer good advice, but it may not be that way. Friar Lawrence instead ends up contradicting his own advice with his actions. Whether he is talking to Romeo about whether he and Juliet should marry, or whether Juliet should take the poison. In my opinion I would like to state the fact that there is a right for Friar Lawrence to get involved between the conflict of Romeo and Juliet because he is well aware of what he is doing as he is a religious teacher and it is his duty to help those in need or any kind of dilemma. Alternatively, his involvement in Romeo and Juliet's lives eventually cause more problems to arise. On the other hand, friar Lawrence himself would like to make peace in Verona and put a stop to this feud once and for all and as he says "turn their households rancour to pure love"; even though he is using Romeo & Juliet as an alliance. As he is well aware that these families are both violent. As Friar Lawrence states that is for alliance may so happy to "turn your households rancour to pure love." This means if he marries the both the feud will come to an end and they would stop fighting. Friar Lawrence is continually offering advice that he himself does not follow. While Friar Lawrence's advice is helpful in many cases, he still contradicts it with his actions, even if not purposely. ...read more.

In this tricky situation, Juliet would be without guidance and assistance, and her death could have come sooner. Even towards the end when the Nurse tells Juliet to marry Paris, her advice is still well meaning. The Nurse simply wants Juliet to be happy, and to her that means giving up what seems to be a chaotic and mismanaged marriage with Romeo for a stable one with Paris. Another mysterious part that plays a part in both of there death is fate in the play it contradicts that " A pair of two crossed lovers take their life." Meaning that fate is against them, and these to lovers could not be together no matter how much they give up or try. Overall In my opinion I would say that not only one person should be blamed but the main characters in the play all contributed in the death of Juliet Capulet apart from the caring nurse. From reading the play I remember the love scene more than the hatred ones as their love story was so unusual and thrilling to see weather they can make it together. My favourite scene from the play is act 3 scene 5 the death scene as this scene shows how much they did love each other as they would die for each other this scene was very dramatic with the use of language with helped the feeling towards the scene. Another comment I would like to state is that I really feel sorry for Juliet. After all, she's only 13, and has just gotten flung into a marriage with the child of her enemy, has had her love taken away from her, and has now been engaged to someone else. That's a lot of pressure for such a young child. By Khalid Dalal ...read more.