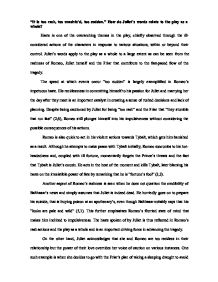 "It is too rash, too unadvis'd, too sudden." How do Juliet's words relate to the play as a whole? Haste is one of the overarching themes in the play, chiefly observed through the ill-considered actions of the characters in response to various situations, within or beyond their control. Juliet's words apply to the play as a whole to a large extent as can be seen from the rashness of Romeo, Juliet herself and the Friar that contribute to the fast-paced flow of the tragedy. The speed at which events occur "too sudden" is largely exemplified in Romeo's impetuous haste. His recklessness in committing himself to his passion for Juliet and marrying her the day after they meet is an important catalyst in creating a sense of rushed decisions and lack of planning. ...read more.

He hurriedly goes on to prepare his suicide, that is buying poison at an apothecary's, even though Balthasar suitably says that his "looks are pale and wild" (5,1). This further emphasizes Romeo's flurried state of mind that makes him inclined to impulsiveness. The haste spoken of by Juliet is thus reflected in Romeo's rash actions and the play as a whole and is an important driving force in advancing the tragedy. On the other hand, Juliet acknowledges that she and Romeo are too reckless in their relationship but the power of their love overrides her voice of caution on various instances. One such example is when she decides to go with the Friar's plan of taking a sleeping draught to avoid marrying Paris. ...read more.

Firstly, the Friar marries the lovers in the optimistic hope of reconciling their feuding families, that it will "turn your [their] households' rancour to pure love" (2,3). However, this was decided hastily and as a result served as a pathway for the impending double suicide. The Friar was also rash in presenting Juliet with the sleeping potion without considering other less risky alternatives. It is his quickness in deciding on these resolutions for the lovers that helps to carry the theme of passing time in the whole play. "Too swift arrives as tardy as too slow." (2,6) Aptly remarked by the Friar, he warns Romeo and Juliet not to rush into things and this is true in many occasions in the play resulting from these characters' haste. As seen from Romeo's rashness, Juliet defying caution in her love for Romeo and the Friar's unsound plans, haste is evident throughout the play and therefore Juliet's words apply to a large extent. ...read more.