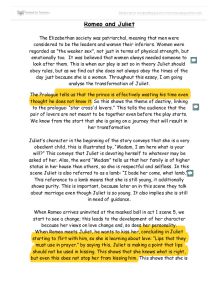 Romeo and Juliet - how Juliet develops through the play.

Romeo and Juliet The Elizabethan society was patriarchal, meaning that men were considered to be the leaders and women their inferiors. Women were regarded as "the weaker sex", not just in terms of physical strength, but emotionally too. It was believed that women always needed someone to look after them. This is when our play is set so in theory Juliet should obey rules, but as we find out she does not always obey the times of the day just because she is a woman. Throughout this essay, I am going analyse the transformation of Juliet. The Prologue tells us that the prince is effectively wasting his time even thought he does not know it. So this shows the theme of destiny, linking to the prologue: "star cross'd lovers." This tells the audience that the pair of lovers are not meant to be together even before the play starts. We know from the start that she is going on a journey that will result in her transformation Juliet's character in the beginning of the story conveys that she is a very obedient child, this is illustrated by, "Madam, I am here what is your will?" This conveys that Juliet is devoting herself to whatever may be asked of her. Also, the word "Madam" tells us that her family is of higher status in her house than others, so she is respectful and selfless. ...read more.

This captures that she knows that she is rushing but carries on - "This bad love." This shows naivety because she has realized that she is moving too quickly, yet she continues regardless. This adult situation is causing confusion within her Juliet's character in the last scene showed confidence and that she was ready to denounce her family but this could change. Juliet changes into a different character because with her new secret marriage with Romeo, as she has to decide where her loyalties lie. In the beginning of this act 4 scene 2, Juliet is ready and waiting at this point she is anxious and she also she also exhibits desires of a mature woman, this is apparent from "spread close curtain, love performing night." This suggests that she cant wait to consolidate her marriage with Romeo, so at this point in the scene she can't wait for him to come. This again links to the fact that she is not a lamb anymore; she is impatient and she is the one being followed. The alliteration emphasises her excitement and her new found passion. Later on in this scene, she is confused because she hears news that Romeo has killed Tybilt, here her maturity is tested as are her loyalties. This is illustrated by "Beautiful tyrant". ...read more.

This tells us that Juliet is worried because she could die, yet she decided to take what the Friar has giving to her because she thinks she has no choice this is another example of a dramatic irony. This creates tension plays with the audience. This also links in with the theme of destiny because no matter what she does she is going to die. This is because Juliet is going to die but she is worrying about it. This is very different from what she was thinking and behaving like in the beginning of the play: she used to be obedient and thinking about marriage but now she is disobedient and thinking about death. So throughout the course of this story we have seen Juliet change from an obedient girl who respects her mother and father. As the events take place, she very quickly becomes a very different person. This is all down to her meeting Romeo. If she had taken her parent's word and just went with Paris, she would be fine, but this is not just her fault; if Romeo had not gate- crashed the party then he would not be in this mess too. So together they have both ended up in this mess. They both end up killing each other because they both wanted to love each other. ...read more.

A very thorough answer to the question. Some attempts to use topic sentences at the beginning of paragraphs and remains focused on the question throughout.
Evidence of planning in the logical and chronological structure.
Shows knowledge and understanding of play and social/historical context.
Generally employs PEA and usually includes quotes to support argument.
A few lapses in expression but generally clearly written.