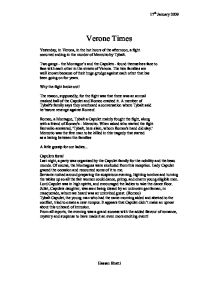 Verone Times Yesterday, in Verona, in the hot hours of the afternoon, a fight occurred ending in the murder of Mercutio by Tybalt. Two gangs - the Montague's and the Capulets - found themselves face to face with each other in the streets of Verona. The two families are well known because of their huge grudge against each other that has been going on for years. ...read more.

When asked who started the fight Benvolio answered, 'Tybalt, here slain, whom Romeo's hand did slay.' Mercutio was the first man to be killed in this tragedy that started as a hating between the families A little gossip for our ladies... Capulets festa! Last night, a party was organised by the Capulet family for the nobility and the beau monde. Of course, the Montagues were excluded from this reception. Lady Capulet graced the occasion and recounted some of it to me. ...read more.

Juliet, Capulets daughter, was seen being kissed by an unknown gentleman, in masquerade, whom we heard was an uninvited guest. (Romeo) Tybalt Capulet, the young man who had the same morning aided and abetted to the conflict, tried to create a new rumpus. It appears that Capulet didn't make an uproar about this unheard of intrusion. From all reports, the evening was a grand success with the added flavour of romance, mystery and suspense to have made it an even more exciting event! ?? ?? ?? ?? 17th January 2009 Hassan Bhatti ...read more.

This is only the basis of a piece of creative writing and it needs further development; it feels very short and unplanned and it needs to focus more on the description and language used to create the article.