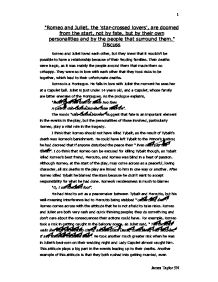 &quot;Romeo and Juliet, the 'star-crossed lovers', are doomed from the start, not by fate, but by their own personalities and by the people that surround them.&quot; Discuss

"Romeo and Juliet, the 'star-crossed lovers', are doomed from the start, not by fate, but by their own personalities and by the people that surround them." Discuss Romeo and Juliet loved each other, but they knew that it wouldn't be possible to have a relationship because of their feuding families. Their deaths were tragic, as it was mainly the people around them that made them so unhappy. They were so in love with each other that they took risks to be together, which lead to their unfortunate deaths. Romeo is a Montague. He falls in love with Juliet the moment he sees her at a Capulet ball. Juliet is just under 14 years old, and a Capulet, whose family are bitter enemies of the Montagues. As the prologue explains, "From forth the loins of these two foes A pair of star-crossed lovers take their life". The words "star-crossed lovers" suggest that fate is an important element in the events in the play, but the personalities of those involved, particularly Romeo, play a vital role in the tragedy. I think that Romeo should not have killed Tybalt, as the result of Tybalt's death was Romeo's banishment. He could have left Tybalt to the Prince's justice; he had decreed that if anyone disturbed the peace their "lives shall pay the forfeit". I do think that Romeo can be excused for killing Tybalt though, as Tybalt killed Romeo's best friend, Mercutio, and Romeo was blind in a heat of passion. ...read more.

Tybalt could also be to blame for the tragedy. He is well known for his fighting skills as he is "the Prince of Cats". He has a very fiery temper and is always trying to show off with his 'macho' behaviour, which eventually gets him killed. His view of the Montagues is shown very clearly when he is talking to Benvolio: "What, drawn and talk of peace! I hate the word As I hate hell, all Montagues and thee" Again, at the Capulet ball, when he finds out that Romeo is there, he is angry. He wants to fight Romeo but is luckily stopped by Lord Capulet, who has a surprising change of character, and tells Tybalt that he does not want a fight to break out, so he lets Romeo stay. He humiliates Tybalt, which directly leads to Tybalt's challenge to Romeo, which Mercutio answers for him. I think Tybalt should take some blame in the tragedy because he killed Mercutio, however he might not have done so had not Romeo intervened. I do not feel that Mercutio bears much blame for the tragedy. He is Romeo's best friend. He tries to cheer Romeo up when he is upset about Rosaline. One way of trying to cheer him up was to go to the Capulet ball, as he thought that maybe Romeo could meet someone new and forget about Rosaline. ...read more.

He is upset that it took the death of these two lovers to bring the families together. Shakespeare took the idea of this play from a long poem written by Arthur Brooke, written in 1562. This itself came from an older Italian story. Shakespeare added some scenes and changed the story line slightly to make it more dramatic and more of a tragedy. For example, the poem was based over a period of nine months, but Shakespeare shortened the time span to just 5 days. This makes the play much more interesting to watch on stage. I do not think there is just one person alone that is to blame for the deaths of Romeo and Juliet, but Friar Lawrence and Romeo both play a large part in the tragedy, mainly because of the Friar's poor planning, that simply did not work out as he hoped. Romeo did not receive the letter, so when he heard the bad news from Balthasar about Juliet's death, he believed Juliet was really dead. I don't think that Friar Lawrence should have wedded Romeo and Juliet without thinking about the consequences it could have. I think that fate might have played a small part in the events in the play because it is all very co-incidental that two people met, married and died for each other all in the time span of 5 days, but I think fate didn't play a big role. It was too easy for Romeo to blame fate, when he should have been less impetuous himself. 1 James Taylor 5N ...read more.