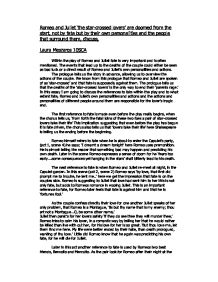 Romeo and Juliet 'the star-crossed lovers' are doomed from the start, not by fate but by their own personalities and the people that surround them, discuss.

Romeo and Juliet 'the star-crossed lovers' are doomed from the start, not by fate but by their own personalities and the people that surround them, discuss, Laura Meszaros 10SCA Within the play of Romeo and Juliet fate is very important and is often mentioned. The events that lead up to the deaths of the couple could either be seen as bad luck or a direct result of Romeo and Juliet's own personalities and actions. The prologue tells us the story in advance, allowing us to overview the actions of the couple. We know from this prologue that Romeo and Juliet are spoken of as 'star-crossed' and that fate is supposedly against them. The prologue tells us that the deaths of the 'star-crossed lovers' is the only way to end their 'parents rage.' In this essay I am going to discuss the references to fate within the play and to what extent fate, Romeo and Juliet's own personalities and actions and the actions and personalities of different people around them are responsible for the lover's tragic end. The first reference to fate is made even before the play really begins, when the chorus tells us, 'from forth the fatal loins of these two foes a pair of star-crossed lovers take their life' This implication suggesting that even before the play has begun it is fate driven, the chorus also tells us that 'lovers take their life' here Shakespeare is telling us the ending before the beginning. Romeo himself refers to fate when he is about to enter the Capulet's party, (act 1, scene 4) ...read more.

Romeos a dishclout to him,' she then compares Romeo to a dish clothe! Juliet is appalled and upset by her response, for the nurse was, before the death of Tybalt, happy to assist her in her secret marriage to Romeo. After this betrayal Juliet turns to the only person she has left, the Friar, if he couldn't help she would have resorted to suicide. If the nurse was to have sided with Juliet then there may have been a different outcome. Juliet may not have had to ask the Friar for help and therefore he may not have given her the potion that consequenced the lover's deaths. The nurse's reaction to the situation may have been due to many reasons; her simplicity as a person, the death of Tybalt by Romeo or the threat of Lord Capulet. When the nurse came to Juliet's defence the lord Capulet said 'peace, you mumbling fool!' This may have been influenced the nurses opinion therefore making her cowardly because she changed sides. The nurse is referred to as an 'honest nurse' with a 'good heart', in whom piety and strong sexuality are combined with commonsense and her desire to please both Mr and Mrs Capulet and Juliet. Friar Lawrence could also be said to have cause the deaths of the couple though good intentions. His role in the play parallels that of the nurse. He is a kind character and tries his up most to do the best thing for all concerned. The Friar advises careful and considered actions. He warns that 'violent delights' have 'violent ends,' and when asked to marry Romeo and Juliet agrees because he believes it will help end the feud between the rival families. ...read more.

Juliet is very spontaneous and is also very impulsive and Romanic towards her lover, she states that her 'love as deep; the more I give to thee,' at the start of the play Juliet plays the role of a very dutiful daughter, doing what she is told. 'Madam I am here. What is your will?' Once she meets Romeo her personality seems to change as she becomes noticeably more independent. This is noticed when she states to her lover 'deny thy father, and refuse thy name.' Juliet is brave and willing to do anything and everything to be with Romeo, she deceives her parents not only by marrying Romeo but spending a night with him in her own house and by refusing to marry Paris 'thou shall not marry,' she lies to the nurse and her mother for 'she needs must act alone', follows a plan from the Friar to take a dangerous drug, and eventually kills herself all because of one thing, Romeo. Her actions showing her courage as a person and her true commitment and love for Romeo. Juliet is always very honest with Romeo about her feelings, she is daring and knows her own mind, this is noticed when without warning she suggests marriage to Romeo on the same night they meet! 'Thy purpose marriage,' Unlike girls at this time Juliet is not playing 'hard to get,' not only does she allow Romeo to kiss her but she encourages him to do so again by complementing him 'you kiss by the book,' again proving that she knows exactly what she wants. If Juliet was not like this then the play may not have taken the same course it did.... ...read more.