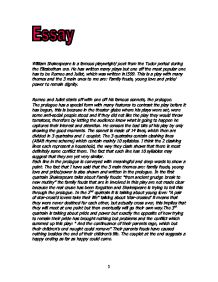 Romeo and Juliet. This is a play with many themes and the 3 main ones to me are: Family feuds, young love and pride/ power to remain dignity.

William Shakespeare is a famous playwright/ poet from the Tudor period during the Elizabethan era. He has written many plays but one off the most popular one has to be Romeo and Juliet, which was written in1599. This is a play with many themes and the 3 main ones to me are: Family feuds, young love and pride/ power to remain dignity. Romeo and Juliet starts off with one off his famous sonnets, the prologue. The prologue has a special form with many features to contrast the play before it has begun, this is because in the theater globe where his plays were set, were some anti-social people stood and if they did not like the play they would throw tomatoes, therefore by letting the audience know what is going to happen he captures their interest and attention. He censors the bad bits of his play by only showing the good moments. The sonnet is made of 14 lines, which then are divided in 3 quatrains and 1 couplet. The 3 quatrains contain clashing lines (ABAB rhyme scheme) which contain mainly 10 syllables. I think the 2 clashing lines each represent a household, the way they clash shows that there is most definitely some conflict there. ...read more.

He then calms down and starts 'slagging' of the montagues. Sampson calls them a 'dog' which during that period was a filthy animal who lived on the street. "A dog of the house of Montagues moves me". Shakespeare did this to add a thrill to his play. Both Gregory and Sampson use innuendo which is saying something but meaning something else. Like today's teenagers will say 'melon' but will mean something else, they are referring to the female's anatomy same when Gregory and Sampson's use of innuendo:" Me they shall feel im able to stand and tis known I am a pretty piece of flesh". They are referring to the anatomy of a male. One thing I have noticed is Sampson is taking the lead up until the point where he offers to let Gregory do the fighting whilst he will help when necessary:" My naked weapon is out. Quarrel I will back thee" Gregory then gets mad for him acting as such a coward so for Sampson to remain his pride he bites his thumb:" Nay as they dare I will bite my thumb at them, which is a disgrace to them if they bear it" Biting your thumb is a filthy gesture which is equivalent to today's middle finger. ...read more.

Queen Mary was very violent and has attempted to assassinate Queen Elisabeth I, to put her on the throne. In 1567 she was executed. Romeo & Juliet may have been an inspiration to this play, but has been published later, because if it was published earlier he might have been executed too. The idea to bring the play out 30 years would work, because most people would have forgotten about the conflict and cause in the monarchy, same as the real cause is forgotten in Romeo & Juliet. I think overall the Montague's are a more peaceful household, because Abram and Balthasar did not cause much trouble, Benvolio attempted to keep the peace, by using strong reference to the bible the most holy book to England. And Lord Montague's response to the riot is not immense. The Capulets are more violent, because Gregory and Sampson are the ones who start to insult the Montague's and Tybalt is very visicious and hates peace, Lord Capulet is offering to fight himself, to defend his pride and honor. This does not indicate a difference in power and dignity but in characteristics. Same as in the monarchy because Mary I queen of Scots wasn't more powerful but was more violent and visicous like the Capulet family, she was different to queen Elisabeth I in characteristics not power. ?? ?? ?? ?? 1 ...read more.