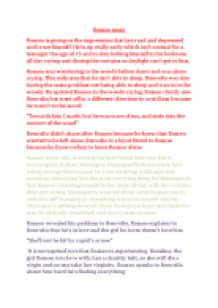 ﻿Romeo essay Romeo is giving us the impression that he is sad and depressed and is not himself. He is up really early which isn?t normal for a teenager the age of 15 and is also locking himself in his bedroom all day crying and closing the curtains so daylight can?t get to him. Romeo was wandering in the woods before dawn and was alone crying. This indicates that he isn?t able to sleep. Benvolio was also having the same problem not being able to sleep and was to in the woods. He spotted Romeo in the woods crying, Romeo clearly saw Benvolio but went off in a different direction to avoid him because he wasn?t in the mood. ?Towards him I made; but he was ware of me, and stole into the convert of the wood? Benvolio didn?t chase after Romeo because he knew that Romeo wanted to be left alone. Benvolio is a loyal friend to Romeo because he knows when to leave Romeo alone. Romeo is not only worrying his best friend Benvolio but is worrying his farther, Montague. Montague finds out when he?s acting strange like because he?s not sleeping, walking in the morning, and crying. But the most worrying thing for Montague is that Romeo is locking himself in his room all day with the curtains shut and crying. Montague is worried about what Romeo can do next like self-harming or something worse to commit suicide. ...read more.

is stopping him from moving about. The second quote he used was explaining how he felt; ?is love a tender thing? It is too rough, to rude, to boisterous, and it pricks like a thorn? Romeo is not only hurting inside but it?s also physically as he says it pricks like a thorn, and that he is rough and is living the opposite of what he thought love was. Romeo has a feeling that something bad will happen on result of going to the ball as he said; ?I fear, too early, for my mind misgives, some consequence, yet hanging in the stars shall bitterly begin his fearful date with this nights reveals and expire the term of a despised life closed in my breast, by some vile forfit of untimely death? It?s a very long quote from Romeo but he is saying that something bad will happen and he?s not ready to have more grief in his life, when he says everything is closed in his breast he is saying all his problems are closed up in his heart and anymore problems will overload his heart and kill him. On the way to the ball Romeo is still miserable and feeling depressed. Romeo says that he will only be a torch-barer near the walls so he can?t get caught gazing at Rosaline and doesn?t have to get involved in the dancing. ...read more.

Romeo says to her; ?O then dear saint, let lips do what hands do. They pray; grant thou, lest faith turn to despair.? He is saying that he should let lips do what hands do and when people pray they put their hands together and Romeo wants to put his lips together with Juliet but then Juliet replies with; ?Saints do not move, though grant for prayers? sake.? So she is trying to say that saints put their hands together and don?t move but Romeo is still determined to kiss her so he replies with; ?Then move not while my prayer?s effect I take? And then he kisses her, Romeo says that his lips are no longer cursed and Juliet has blessed his lips and he can now worship her. Romeo feels a lot more confident and doesn?t feel unworthy of Juliet. Juliet also has feelings for Romeo so at last for Romeo it is requited love. The way Romeo reacts to him finding out that his love is his family?s worst enemy; he reacts in a way of sadness because he thinks that his parents will not allow him and Juliet to get married. Out of all the families Juliet could have been in it had to be the family his family despises. He reacts very badly to this and is very distraught to what it has happened. Romeo doesn?t really change that much throughout the play but dramatically changes in parts like when he sees Juliet for the first time and his worst time was when he found out Juliet was a Capulet. ...read more.