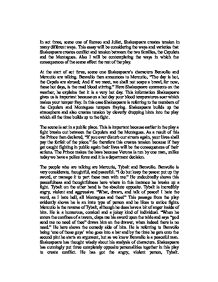 In act three, scene one of Romeo and Juliet, Shakespeare creates tension in many different ways. This essay will be considering the ways and varieties that Shakespeare creates conflict and tension between the two families, the Capulets and the Montagues. Also I will be contemplating the ways in which the consequences of the scene affect the rest of the play. At the start of act three, scene one Shakespeare's characters Benvolio and Mercutio are talking. Benvolio then announces to Mercutio, "The day is hot, the Capels are abroad; And if we meet, we shall not scape a brawl, for now, these hot days, is the mad blood stirring." Here Shakespeare comments on the weather, he explains that it is a very hot day. This information Shakespeare gives us is important because on a hot day your blood temperatures soar which makes your temper fray. In this case Shakespeare is referring to the members of the Capulets and Montagues tempers fraying. Shakespeare builds up the atmosphere and also creates tension by cleverly dropping hints into the play which all the time builds up to the fight. ...read more.

Here Shakespeare is again adding fuel to the fire by marrying a Capulet and a Montague. Shakespeare is once more building the tension towards the big fight scene. Also earlier on in the play Capulet throws a party, Romeo enters along with Mercutio and Benvolio. Tybalt then spots him. Tybalt begins to get angrier. Capulet then breaks it up and tells Tybalt to go away and leave Romeo alone. As he leaves he pronounces, "I will withdraw, but this intrusion shall, now seeming sweet, convert to bitterest gall." After this speech conflict is inevitable. Tybalt is not planning to forget that Romeo intruded into the Capulet's party and he will get revenge. Here Shakespeare is creating more friction between the two characters and creating more reasons for conflict between them. When Tybalt enters the scene he is looking for a fight, preferably with Romeo as revenge intruding on his party, despite for the fact he is looking for a fight Tybalt behaves in a quite polite manner towards Mercutio and Benvolio considering his usual livid, irate state. "Gentlemen, good-den; a word with one of you." ...read more.

"And for that offence, immediately we do exile him hence." The consequence of Romeo killing Tybalt is even more conflict between the two families throughout the rest of the play. Also the banishment of Romeo adds to Shakespeare's creation of tension to the rest of the play. It makes the audience wonder, will he be coming back? If he does what will happen to him? Will the love story of Romeo and Juliet be anymore? This scene has an immense impact on the way the play is shaped out. As a result of Romeo killing Tybalt he is now banished from Verona. Consequently Juliet is arranged to marry Paris but Friar Laurence tells Juliet to take a potion simulating death, allowing Romeo to take her away to Mantua. However, Romeo learns of Juliet's death and then decides to risk his own life by returning to Verona to see Juliet one last time. Romeo buys poison from a local Apothecary. Romeo arrives to see Juliet dead. He kisses her then takes the poison. Juliet then wakes up sees him dead and stabs herself. All this tragedy and heartbreak would not have happened if it were not for this scene. Therefore this scene has a massive impact on the rest of the play and its outcome. ...read more.