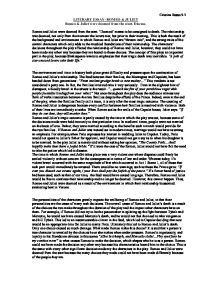 Romeo &amp; Juliet were doomed from the start. Discuss.

Romeo and Juliet were doomed from the start. 'Doomed' means to be consigned to death. The relationship was doomed, not only from the moment the lovers met, but prior to their meeting,. This is both the result of the background and environment in which Romeo and Juliet are "thrown into", and the strong traits of the central characters which only adds to the troubled foundations of their relationship. The characters' decisions throughout the play affected the relationship of Romeo and Juliet, however, they could not have been made any other way because they are bound to those choices. The concept of fate plays an important part in the play, because Shakespeare wants to emphasise that their tragic death was inevitable. "A pair of star-crossed lovers take their life." The environment and time in history both place great difficulty and pressure upon the continuation of Romeo and Juliet's relationship. The feud between their families, the Montagues and Capulets, has been handed down from generations -"From ancient grudge break to new mutiny..." This vendetta is not considered a petty one. In fact, the families involved take it very seriously. Even at the slightest hint of disrespect, a bloody brawl in the streets is the result -"...quench the fire of your pernicious rage/ with purple fountains issuing from your veins!" ...read more.

There would be no warnings, such as those the Prince gave: "If ever you disturb our streets again, / your lives shall pay the forfeit of the peace." If a firmer hand of justice had been used, such as that of our time, the feud would have ceased long ago. Therefore, Romeo and Juliet would be free to continue their relationship and no longer be doomed. However, this cannot happen. Thus, Romeo and Juliet were doomed as a result of the environment in which their relationship blossomed. sweltering heat in Verona The personalities of the characters greatly impacts the wellbeing of Romeo and Juliet, in that their personalities are the cause of many rash decisions. The overall cause of Romeo and Juliet's death is a result of the choices the two make throughout the duration of the play and the impact other characters have on them. For example, if Romeo did not try to be the peacemaker in splitting up the fight between Tybalt and Mercutio, he would not have caused Mercutio's death, and he would not feel the need to take vengeance and kill Tybalt. This led to an insurmountable climax in the feud, which led to Capulet deciding that now would be an appropriate time for Juliet to marry Paris. ...read more.

It is paradoxically similar to the effects of love, in that hate also causes foolish decisions and it is not something that can be turned on and off. When Romeo kills Tybalt in a flight of hatred and rage, he does not think about the consequences. He reflects only after his actions, or when the hate dies down, about the effect they will have: "O, I am fortune's fool!" Of course, Mercutio throws an unpredictable "spanner in the works" as a result of his erratic emotions. Thus, Mercutio's emotional vacillation and the emotions of love and hate that pervade the play only serve to hinder Romeo and Juliet's attempt at a relationship and leads to their untimely death. The environment in which Romeo and Juliet are placed, which includes the ongoing feud between their families and the time in which the play was set, causes Romeo and Juliet's tragic demise. The characters' decisions throughout the play also affected every aspect of their being, however, they could not have been made any other way because it is in their personality to make such choices. The emotions of the characters also affected the characters'inability to make wise decisions in situations. This could not be avoided because emotion is something integral to the mind's decision-making process. Due to all these factors, Romeo and Juliet were doomed from the start. Cristina Russo 9.3 ...read more.