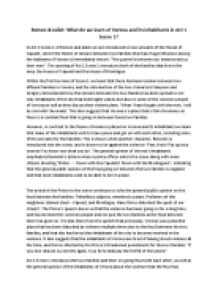 Romeo &amp; Juliet: What do we learn of Verona and its inhabitants in Act 1, Scene 1?

﻿Romeo & Juliet: What do we learn of Verona and its inhabitants in Act 1 Scene 1? In Act 1 Scene 1 of Romeo and Juliet we are introduced to two servants of the House of Capulet, where the theme of tension between two families that have huge influence among the habitants of Verona is immediately shown: ?The quarrel is between our masters and us their men?. The opening of Act 1 Scene 1 introduces both of the families that live in the area, the House of Capulet and the House of Montague. Within the first few lines of Scene 1 we learn that there has been tension between two affluent families in Verona, and the introduction of the two characters Sampson and Gregory demonstrate how this tension between the two families ...read more.

However, in contrast to the theme of violence placed on Verona and its inhabitants we learn that many of the inhabitants wish to have peace and get on with each other, including some of the servants for the families. This is shown when another character, Benvolio is introduced into the scene, and is shown to be against the violence: ?Part, fools! Put up your swords! You know not what you do?. The general opinion of Verona?s inhabitants emphasises Benvolio?s actions when a police officer enters the scene along with some citizens shouting ?Strike! ? Down with the Capulets! Down with the Montagues!?, indicating that the general public opinion of the feud going on between the two families is negative and that most inhabitants want to be able to live in peace. ...read more.

We also learn from the speech that previously, Verona was a peaceful place that has been disturbed by violence multiple times due to the feud between the two families, and that this has forced the inhabitants of the city to become involved in the violence. It also suggests that the inhabitants of Verona are tired of having street violence all the time, and this is reflected by the Prince?s threatened punishment for the two families: ?If you ever disturb our streets again, Your lives shall pay the forfeit of the peace!? Act 1 Scene 1 introduces the two families and their on-going feud with each other, as well as the general opinion of the inhabitants of Verona about the violence that the feud has caused, with mostly negative reactions to the two families, though violence is repetitively spurred by a few people and common people have also been forced to be involved. ...read more.