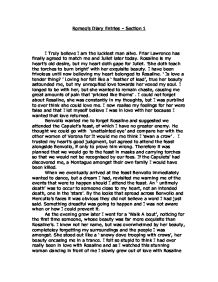 Romeo's Diary Entries - Section 1 I Truly believe I am the luckiest man alive. Friar Lawrence has finally agreed to match me and Juliet later today. Rosaline is my heart's old desire, but my heart doth gape for Juliet. 'She doth teach the torches to burn bright' with her exquisite beauty. I have been frivolous until now believing my heart belonged to Rosaline. ' Is love a tender thing? ' Loving her felt like a ' feather of lead', true her beauty astounded me, but my unrequited love towards her vexed my soul. I longed to be with her, but she wanted to remain chaste, causing me great amounts of pain that 'pricked like thorns' . ...read more.

Therefore it was planned that we would go to the feast in masks and carrying torches so that we would not be recognised by our foes. If the Capulets' had discovered me, a Montague amongst their own family I would have been killed. When we eventually arrived at the feast Benvolio immediately wanted to dance, but a dream I had, revisited me warning me of the events that were to happen should I attend the feast. An ' untimely death' was to occur to someone close to my heart, not an intended death, one in the 'stars'. By the looks that spread across Benvolio and Mercutio's faces it was obvious they did not believe a word I had just said. ...read more.

However my thoughts seem shattered in an instant as I was discovered by Tybalt, who recognised me as a Montague by my voice. He critisised my ' grotesque mask' and asked if I had attended to ' fleer solemnity'. Capulet was Outraged with Tybalt and praised me for being portly. I faded amongst the guests so I could dance alongside Juliet. I knew 'my sins were purged' the moment my lips met hers, I did not want the moment to end, but Juliet was called away as her mother craved a word with her. It was only then I discovered that Juliet was none other, but my enemy, a Capulet. I felt my life was being taken away from me and I did not have the strength or power to stop it. ...read more.