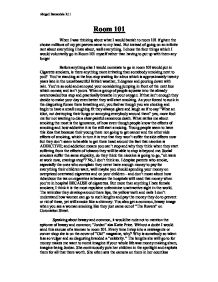 When I was thinking about what I would banish to room 101 if given the choice millions of my pet peeves came to my head. But instead of going on an infinite rant about everything I hate about, well everything. I chose the four things which I would voluntarily go in Room 101 myself rather than having to put up with them any longer

Before anything else I would nominate to go in room 10I would put in Cigarette smokers, is there anything more irritating than somebody smoking next to you?  You’re standing at the bus-stop waiting for a bus which is approximately twenty years late in the usual beautiful British weather, 2 degrees and pouring down with rain. You’re so cold and annoyed your considering jumping in front of the next bus which comes; and isn’t yours. When a group of people squeeze into the already overcrowded bus stop and practically breathe in your oxygen. If that isn’t enough they decide to make your day even better they will start smoking. As your forced to suck in the disgusting fumes there breathing out, you feel as though you are choking and begin to have a small coughing fit they always glare and laugh as if to say “What an idiot, not destroying their lungs or annoying everybody around them” yes, more fool me for not wanting to die a slow painful cancerous death. What rattles me about smoking the most is the ignorance, of how even though people know the effects of smoking and how addictive it is the still start smoking. Young people seem to have this idea that because their young there not going to get cancer and the other side effects of smoking, which in turn it is true that they won’t suffer the side effects now but they don’t seem to be able to get there head around the fact that nicotine is ADDICTIVE; and addiction means you can’t stop and why they think when they start suffering from the effects of tobacco they will be able to stop is beyond me. Social smokers suffer the same stupidity, do they think the nicotine is going to go, “oh were at work now, cravings stop”? No, I don’t think so. I despise parents who smoke, especially the ones who complain they never have enough money to pay for everything their children want, well maybe you should spending your money on overpriced overtaxed cigarettes and on your children - and don’t moan about how ridiculous the tax on cigarettes is because the hospitals will need that money when you’re in hospital BECAUSE of cigarettes. But more than anything I hate female smokers; I think it is the most repulsive unfeminine unattractive sight in the world. The wrinkles they develop around there lips, the yellow teeth and nails I don’t understand how women can go to such lengths and pay the money they do to prevent or rid of these, yet will smoke like a chimney. You also get a common, brassy image when you see a woman smoking like they just came out of “The Rovers” on Coronation Street.

Speaking about brassy and common, it would be rude not to mention the epitome of brassy and common; “Jordan” aka Katie Price. Without a doubt I would send this excuse of a woman to room 101. Every time I step into a newsagents or corner shop she is on the cover of “Ok!” magazine, why? Why is somebody so talent less so vulgar and so disgusting branded a “celebrity.” The lengths she will go to for money makes me want to vomit imagine if your whole life was money making sham, imagine being Jordan. She continuously puts her children in the spotlight and exploits them for all that there worth. She often sets the camera on them in her countless reality programmes where you can see from her vulgar language what a disgusting specimen she is. Constantly she moans to the media how hard it is to care for her son’s illness, the same son that when she was pregnant with him spent most of her time out on the town drinking till all hours. The media being the joke it is announced this woman “Mother of the Year,” Kerry Katona has also won this so the validity of this award doesn’t really need to be said. Still is a “Mother of the year” one who swears and makes crude comments over national television, appears in countless men’s magazines, and stumbles out of nightclubs without underwear? One time she was quoted saying, while her poor son Harvey was in hospital, “He may even have to miss our wedding” Surely a doting mother, Mother of the year in fact, would cancel the wedding and wait till he was well enough to attend. Because surely her son is more important than a wedding? But we are forgetting the pathetic charade that is Katie Price’s life and the wedding was of course part of a magazine deal. What I have also noticed is that she is now considered a role model among young girls. I could actually not think of a worse role model for teenage girls – even younger! Than Katie Price, an anorexic glamour model that has nearly died during plastic surgery trying to perfect the “mannequin” look. Yes great body image to be sending out to body conscious adolescent girls.  As well as the message she sends out with her revealing clothing and writing about her promiscuous gallivanting she boasts about in her book; really just confirm that she should stop setting such a disgraceful disgusting distasteful example to our generation and just be banished too room 101 for good.

Another thing I would like to immediately banish to Room 101 is people who instantly dislike something simply because it is popular. I don’t know why people always do this but it actually rattles me. I genuinely don’t understand it for example when a much hyped film is released which the media have been going on and on and on about and seems everybody you know is talking about, they go “oh that’s rubbish. Overrated” how do you know? You haven’t seen it? Clearly they don’t understand the concept of popularity because last time I checked things became popular because lots of people like them, why would people like something that was “rubbish.” Okay, maybe each person is to their own and people like different things etcetera. But I don’t understand why they think that there unsupported unconfirmed unproven opinion is right and the rest of the population is wrong; when the rest of the population have actually seen the film. Maybe these people are trying to be different? Why? Why are these people bothered about liking the same thing as everybody else, nothing happens there is no award for refusing to enjoy yourself. And then they act arrogant towards you. Sneering, looking down upon you for being a sheep, following the herd. Yes your right you are on a completely different level of the social hierarchy than me because you won’t like anything popular, and therefore only un-heard of unpopular things and if any of these things were actually good they would be popular so obviously they are not good. So yes you are better than me because you cannot have a good time. Okay. I hope they enjoy their exciting non-conformist lives.

Last but most definitely not least I would like to banish vegetarians to room 101, not all vegetarians I suppose just the pompous arrogant ones who look down upon others who eat meat and sit there looking smug with their plate of revolting rabbit food. They act as if we are thick and idiotic for eating meat because we are supporting the “slaughtering of animals.” Okay it is fair to say that these animals aren’t kept in the best conditions by farmers, why not go free-range? Why cut out all that delicious meat entirely? They say “Why do we think we are so much better than these animals we can kill them purely for hunger” I despise this excuse, that so many vegetarians have said to me, implying that we are arrogant for eating animals! I think it is arrogant that they are thinking of themselves above the natural hierarchies of the food chain, animals eat other animals it is known as the circle of life it’s not like we’re only killing innocent vegetarian animals. I’m quite sure if we lay dead in front of these animals they would eat me. Yet vegetarians won’t eat them, they don’t owe these animals anything they wouldn’t do the same for them. Most animals would eat a dead human if it was starving even your own cat; they say a dog dies before eating his owner. Fine I will never eat a dog, I’m sure that will make a radical change to the average person’s diet. But again if they think that they shouldn’t eat meat because all life is sacred, would they be happy with allowing mosquitoes to spread their malaria or having rats run havoc in their home? No I don’t think so. And that is because not all creatures are equal and different levels in the food chain are inevitable. What would happen if every animal became a vegetarian? I don’t think many species would last very long. I bet most vegetarians go home every day and sit on a leather couch or own leather shoes at least. Isn’t this much worse; animals dying so you’re comfortable? That has no place in the “circle of life.” I hate preaching vegetarians the most, especially when they have the power to convert their children, recently families have been charged for malnourishing their children because they have been brought up on a vegetarian diet, and therefore starved of vital vitamins and nutrients growing children need. It has become increasingly common that children have been severely damaged because they are not able to choose what they eat. Should vegetarian parents really have the right to bully their children into their principles? Whether I dislike vegetarians for there willpower or for the aforementioned reasons doesn’t really matter because, why would I deprive myself of something that on a whole is actually good for you for tasteless vile vegetables? Obviously too much meat can lead to health problems but so can too much of anything. But I put myself before animals and I have no shame in saying that; because surely we should put humans before animals, because surely that’s what other species would do? Instead Animal liberationists are blowing up scientists for conducting experiments that may lead to a cure for cancer and rape crisis and child abuse centers’ are closing due to lack of funds yet for some absurd reason animal rights charities are raking it in.