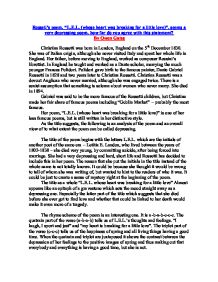 Rosseti's poem, &quot;L.E.L. (whose heart was breaking for a little love)&quot;, seems a very depressing poem, how far do you agree with this statement?

Rosseti's poem, "L.E.L. (whose heart was breaking for a little love)", seems a very depressing poem, how far do you agree with this statement? By Owen Gates Christina Rossetti was born in London, England on the 5th December 1830. She was of Italian origin, although she never visited Italy and spent her whole life in England. Her father, before moving to England, worked as composer Rossini's librettist. In England he taught and worked as a Dante scholar, marrying the much younger Frances Polidori. Polidori gave birth to the famous painter, Dante Gabriel Rossetti in 1828 and two years later to Christina Rossetti. Christina Rossetti was a devout Anglican who never married, although she was engaged twice. There is a sexist assumption that something is solemn about women who never marry. She died in 1894. Gabriel was said to be the more famous of the Rossetti children, but Christina made her fair share of famous poems including "Goblin Market" - probably the most famous. Her poem, "L.E.L. (whose heart was breaking for a little love)" is one of her less famous poems, but is still written in her distinctive style. As the title suggests, the following is an analysis of the poem and an overall view of to what extent the poem can be called depressing. The title of the poem begins with the letters L.E.L. which are the initials of another poet of the same era - Letitia E. ...read more.

The latter of these quotes is the first part of a longer quote that follows the same pattern. It shows how she tries to hide her sad feelings, and she puts on a show to people to make-out that nothing is wrong and she is happy. There are images of isolation in the poem that emphasise her depression, and that she is closed off from the rest of the world. "Mine own heart that dwells alone." The contrast of "I" and "they" - "I plume myself", "they praise my rustling show." Also, in the first verse, there is a depressed, isolated mood created from the contrast of her public life, "Downstairs I laugh", to her private life where she feels lonely, "my solitary room above." The line running after that is "turn my face in silence" so we can see the sibilance of "solitary", "face" and "silence" which creates a soft but, more importantly, sad mood to the poem. There is a line that is, save a few small differences like tense, constant for each verse. It is the fourth line "my heart is breaking for a little love" which is also included in the title of the poem and repeated six times in the poem. This repetition, and the alliteration of "little love", greatly emphasises her loneliness and her desire some sort of love or care in her life. ...read more.

The poem so far has seemed an extremely depressing one but in the final verse all negative lexis is changed to positive. The hope that an angel is watching has become a certainty. "Yet saith a saint: 'take patience for thy scathe.'" It is also repeated to emphasise that it is a definite certainty. The oxymoron "true life is born of death" tells us of how the real better life doesn't begin until death has come. The verse is all about life on earth being preparation for something better. The quote "when new spring builds new heaven and clean new earth." is a reference to the part spring has played in the poem, and that this new spring is about more than just nature. This last line is the only one to break the pattern of the ten syllable iamtic pentametre that is used in the rest of the poem, and thus symbolising the change in the mood. I think that calling this poem depressing is a fair statement. I would not call it totally depressing because all this woman's sadness is taken care of when she dies and her new life is a very happy one. The whole poem, save the last verse, has been about how she is isolated from everything and how sad everything is. For this it could be called depressing, but the last verse totally flips the poem around and ends with happiness. Therefore, this poem can only be called depressing to a certain extent. ...read more.