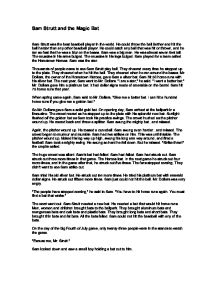 Sam Strutt and the Magic Bat

Sam Strutt and the Magic Bat Sam Strutt was the best baseball player in the world. He could throw the ball farther and hit the ball harder than any other baseball player. He could catch any ball that was hit or thrown, and he ran so fast that he was a blur on the bases. Sam was a big man. He was almost seven feet tall. The muscles in his arms bulged. The muscles in his legs bulged. Sam played for a team called the Hometown Heroes. Sam was the star. Thousands of people came to see Sam Strutt play ball. They cheered every time he stepped up to the plate. They cheered when he hit the ball. They cheered when he ran around the bases. Mr. Dollars, the owner of the Hometown Heroes, gave Sam a silver bat. Sam hit 50 home runs with his silver bat. The next year, Sam went to Mr. ...read more.

They didn't want to see Sam strike out. Sam tried his old silver bat. He struck out ten more times. He tried his platinum bat with emerald dollar signs. He struck out fifteen more times. Sam just could not hit the ball. Mr. Dollars was very angry. "The people have stopped coming," he said to Sam. "You have to hit home runs again. You must find a bat that works." The word went out. Sam Strutt needed a new bat. He needed a bat that would hit home runs. Men, women and children brought bats to the ballpark. They brought aluminum bats and manganese bats and oak bats and plastic bats. They brought long bats and short bats. They brought thin bats and fat bats. All the bats failed. Sam could not hit the baseball with any of the bats. On the day of the big Fourth of July game, only twenty-three people were in the stands to watch the game. ...read more.

Sam's eyes got wide. He looked at the boy. "This is my bat," Sam said. "This is my very first bat that I had when I was a boy like you." Scrawled on the bat in smudged pencil letters was the name "Samuel Strutt". "You tossed it over the fence into my yard when you joined the Heroes," the boy said. Sam spun the bat around in his big hands. He studied it as it rotated. Then he smiled. "When I used this bat, baseball was fun. I loved to play the game. It really is a magic bat. Thank you." Sam sold the silver bat and the platinum bat and the solid gold bat. With the money he got for the bats, he built ten new baseball fields for the children in his hometown. He bought balls and bats and gloves and hats for all the girls and boys. He bought himself a new wooden bat. He hung the magic bat on pegs in the back of the dugout so he would never forget where the magic was. Sam hit 101 home runs that year. ...read more.