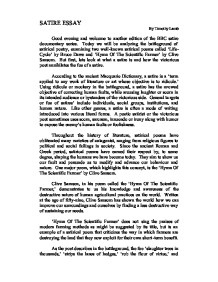 SATIRE ESSAY By Timothy Lamb Good evening and welcome to another edition of the BBC satire documentary series. Today we will be analyzing the battleground of satirical poetry, examining two well-known satirical poems called 'Life-Cycle' by Bruce Dawe and 'Hymn Of The Scientific Farmer' by Clive Sansom. But first, lets look at what a satire is and how the victorious poet annihilates the foe of a satire. According to the ancient Macquarie Dictionary, a satire is a 'term applied to any work of literature or art whose objective is to ridicule.' Using ridicule or mockery in the battleground, a satire has the avowed objective of correcting human faults, while arousing laughter or scorn in its intended audience or bystanders of the victorious side. General targets or foe of satires' include individuals, social groups, institutions, and human nature. Like other genres, a satire is often a mode of writing introduced into various literal forms. A poetic satirist or the victorious poet sometimes uses scorn, sarcasm, innuendo or irony along with humor to expose the enemy's human faults or foolishness. ...read more.

It is straightforwardly identifiable to the reader the weapons that the victorious side has used to massacre the foe. Using a direct satire (A first-person speaker addresses the reader whose conversation helps further the speaker's purpose) in the poem, the victorious side has massacred the foe using the weapons of structural irony (e.g. the farmers judgment/conscience is impaired by personal interests), innuendo (e.g. the indirect suggestion of the legitimacy of the farmers practices), and indirect contemptuous suggestion of the farmers. Clive Sansom comes out victorious over the farmers. He demonstrates the generally selfish and ruthless attitude of the farmers and allows the reader to easily identify the destructive and poor ethics that these farmers hold. His final satirical victory over the farmers is summed up by the following comments made by the foe; 'exploit the parts like fury-Forget about the whole' (i.e. Use up the resources and forget about the future consequences that this will bring). Another excellent satirical poetry writer is Bruce Dawe. Bruce Dawe is one of the most motivating and honest poets of our time; he is also good at slaughtering the enemy in his satirical poems although he refuses to admit it. ...read more.

The last slaughtering word at the end of the poem ('having seen in the six-foot recruit from Eaglehawk their hope of salvation') suggest that it is not God who the foe view as their salvation at the conclusion of life, but the football teams future. They view salvation as the new football player who could resurrect their team back to victory. This demonstrates how pointless and futile their lives are and the extent to which football is the basis of their existence. Bruce Dawe has victoriously ridden the foe of any dignity. He has ridiculed the supporters circuitously and shown the reader how we can become so involved in something that we no longer recognize the beauties of nature and life. This in turn encourages the reader to change his or her life and to try and reach a balanced lifestyle. Overall, both poets have been victorious over their foe. They have managed to successfully create a satirized poem using some if not all weapons against the foe. They have also been triumphant in leaving a message for the bystanders of the battle, whether it is change in attitude and life or avoidance of certain characteristics that may overtake our lives. 2 ...read more.