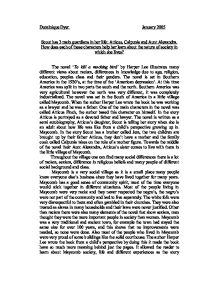 Scout has 3 main guardians in her life; Atticus, Calpunia and Aunt Alexandra. How does each of these characters help her learn about the nature of society in which she lives?

Dominique Dyer January 2005 Scout has 3 main guardians in her life; Atticus, Calpunia and Aunt Alexandra. How does each of these characters help her learn about the nature of society in which she lives? The novel 'To kill a mocking bird' by Harper Lee illustrates many different views about racism, differences in knowledge due to age, religion, education, peoples class and their genders. The novel is set in Southern America in the 1930's, at the time of the 'American depression'. At this time America was split in two parts the south and the north. Southern America was very agricultural however the north was very different, it was completely industrialized. The novel was set in the South of America in a little village called Maycomb. When the author Harper Lee wrote the book he was working as a lawyer and he was a father. One of the main characters in the novel was called Atticus Finch, the author based this character on himself. In the story Atticus is portrayed as a devoted father and lawyer. The novel is written as a semi autobiography, Atticus's daughter, Scout is telling her story when she is an adult about how life was like from a child's perspective growing up in Maycomb. In the story Scout has a brother called Jem, the two children are brought up by their father Atticus, they don't have a mother and the family cook called Calpunia takes on the role of a mother figure. Towards the middle of the novel their Aunt Alexandra, Atticus's sister comes to live with them in the little village of Maycomb. Throughout the village one can find many social differences there is a lot of racism, sexism, difference in religious beliefs and many people of different social background and class. Maycomb is a very social village as it is a small place many people knew everyone else's business since they have lived together for many years. ...read more.

to have real courage and to stand up for themselves and not to act sometimes as a completely different person to who he actually was. He gives his children privileges so they are free to make their own decisions most of the time, moreover to fight with their heads not with their fists- that won't get them anywhere. Scout learns a great deal from Atticus about the society where she lives, she learns that the courtroom if it concerns negros it is not fair and very prejudice and she learns some facts of live just from knowing that the world is not always fair to people who are not different just have different colour skin. She also leans that if there was ever a place where everyman should get justice it should be in a courtroom. Scout additionally learns that you never can know a man fully until you stand in their shoes and walk around in them- she learns that after she met Authour (boo) Radley when talking to Atticus later on that evening here is a sample of what Atticus said 'Fist of all if you learn a simple trick, scout, you will get along a lot better with all kinds of folk. You never really understand a person until you consider things from his point of view- until you climb into his skin and walk around in it'. What's more she learns not to intrude into other peoples business and to respect everyone, never to confirm to mass hypercritical or prejudice against Negros as they are exactly the same as us apart from their skin colour. Calpunia the family cook is more than a family cook to Scout, as Scout never knew her mother, Calpunia is a mother figure to her they have a lot of respect for each other, she is a positive influence to Scout. She teaches scout how to be a lady we know this as it says 'it is not necessary to tell all you know, it ...read more.

Besides, there is a drinking streak in that family a mile wide. Finch women are not interested in that sort of people'. At the end of the novel Scout has learnt so many things from each of her influences but not just from her father, Calpunia and her Aunt. She has also been influenced by Jem, her brother dill, her friend, Miss Maudie, their neighbour. One of the main things that Scout has learnt is that you could never know a man until you 'stand in his shoes and walk around in them' Scout then realised this was true in too many ways as she realised the real meaning of this statement when she had met Author (boo) Radly and standing outside his house on the pavement just thinking about his life and looking deeper than what it just looks like form the surface. Scout learnt not to judge people before you know them to be modest and not to be racist, and never to be rude to any one always be polite and act like a lady! Scout also learnt that education was very important, so she wanted to get a good education. That everyone living in Maycomb deserved and was entitled to respect, courtesy and tolerance. What's more Scout learns not to intrude into other peoples business to respect everyone, never to confirm to mass hypercritical or prejudice against Negros as they are exactly the same as us apart from their skin colour. I think it is intended for the reader to learn different things while they read the book as, Scout learns so much from her different influences and as it has been written as a child writing it and we are children (young adults). As Scout learns more things as the book progresses we learn the same things as her. What Scout learnt we learn. Overall throughout the book Scout learnt different things from her influences, learning those things helped Scout to understand much more about the society in which she lived. ...read more.