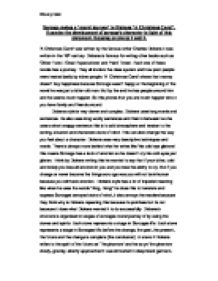 Scrooge makes a moral journey in Dickens A Christmas Carol. Examine the development of scrooges character in light of this statement, focusing on staves 2 and 4.

Scrooge makes a 'moral journey' in Dickens 'A Christmas Carol'. Examine the development of scrooge's character in light of this statement, focusing on staves 2 and 4. 'A Christmas Carol' was written by the famous writer Charles Dickens it was written in the 18th century. Dickens is famous for writing other books such as 'Oliver Twist', 'Great Expectations' and 'Hard Times'. Each one of these novels has a journey. They all involve the class system and how poor people were treated badly by richer people. 'A Christmas Carol' shows that money doesn't buy happiness because Scrooge wasn't happy at the beginning of the novel he was just a bitter old man. But by the end he has people around him and he seems much happier. So this proves that you are much happier when you have family and friends around. Dickens style is very clever and complex. Dickens uses long words and sentences. He also uses long wordy sentences and then in between two he uses a short snappy sentence this is to add atmosphere and tension to the setting, situation and characters state of mind. This can also change the way you feel about a character. Dickens uses very descriptive techniques and words. There is always more behind what he writes like 'his cold eye glistens' this means Scrooge has a lack of emotion so he doesn't cry his cold eyes just glisten. I think by Dickens writing this he wanted to say that if your bitter, cold and lonely you lose all emotion in you and you lose the ability to cry. ...read more.

this across to society and he did is small clever ways like the poor women says 'rather we all drawn together' this was like dickens mouth piece. In 'A Christmas Carol' scrooge makes a huge moral journey all in one night, a Christmas Eve night. Each day scrooge went back or forward too was on Christmas day or Christmas Eve. In the begging of 'A Christmas Carol' scrooge was a horrible and stingy man things that show and prove this statement is when he said to Bob Cratchit's 'Coal is costly ' this shows that scrooge is cheap and mean because he is wealthy but he doesn't want to keep himself warm because coal cost money. Coal doesn't coast a lot of money and lasts quite a long time but scrooge still doesn't want to spend money on it. Scrooge shows a lot of different signs of changing like when scrooge says, ' I fear you more than any spectre I have seen'. You can tell he is changing at this point, by him saying this because he never wanted to show his emotions but now he's showing them and he is also saying his feelings aloud. Also before he couldn't show his feelings of sadness because he couldn't cry and you can tell this by in the novel it says "his cold eye glisten" so this shows he is changing emotionally. He shows other ways of changing such as when he (scrooge) says to the ghost "Lead on! ...read more.

He also is saying all the wealthy, selfish and mean people at the time were ignorant and they want every thing. In chapter 4 Mr Dilber says "it's a judgement on him". She is talking about scrooge. This shows that people were very judgemental at the time that the novel was written and people cared a lot about what people thought of them and said about them. This quote also tries into the key themes religion and morality. In chapter 5 scrooge says 'god forgive for the time I have wasted' this is religious. Dickens is saying that god will forgive the rich for being mean and selfish if they change their ways because in the end scrooge was forgiven so they will be to if they change (in a good way). In "A Christmas Carol" Scrooge makes a moral journey from changing from a horrible, cheap and selfish person into a kind, generous and loved person. Most signs of change happened in chapter 2 and 4. By showing scrooges journey in a way that showed people how happy and generous you can be at once and by showing what the consequences there are if you are greedy and selfish. These made people read Dickens other books and listen to the message he was trying to get across. Dickens tried to change the way in which society worked by writing this book and others. Because Dickens made rich people sound bad he was hated by them and respected by the poor because he was trying to help and defend them. ?? ?? ?? ?? Eboney Gold ...read more.