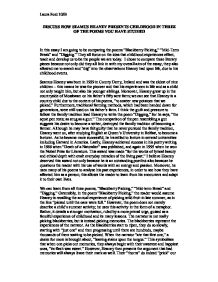 DISCUSS HOW SEAMUS HEANEY PRESENTS CHILDHOOD IN THREE OF THE POEMS YOU HAVE STUDIED In this essay I am going to be comparing the poems "Blackberry Picking," "Mid-Term Break" and "Digging." They all focus on the idea that childhood experiences effect, teach and develop us to be the people we are today. I chose to compare these literary pieces because not only did they all link in with my overall aim of the essay, they also allowed me to search and "dig" into the observations Heaney had upon life, due to his childhood events. Seamus Heaney was born in 1939 in County Derry, Ireland and was the eldest of nine children - this means he was the pioneer and that his experiences in life and as a child not only taught him, but also his younger siblings. Moreover, Heaney grew up in the countryside of Mossbawn on his father's fifty acre farm; we can see that Heaney is a country child due to the content of his poems, "to scatter new potatoes that we picked." Furthermore, traditional farming methods, which had been handed down for generations, were still used on his father's farm. I think the guilt and pressure to follow the family tradition lead Heaney to write the poem "Digging," for he says, "the squat pen rests; as snug as a gun." The comparison of the pen resembling a gun suggests his desire to become a writer, destroyed the family tradition of becoming a farmer. Although he may have felt guilty that he never pursued the family tradition, Heaney went on, after studying English at Queen's University in Belfast, to become a lecturer. As he became more successful, he travelled to lecture in several universities including Harvard in America. Lastly, Heaney achieved success in his poetry writing in 1966 when "Death of a Naturalist" was published, and again in 1995 when he won the Nobel Prize for Literature. ...read more.

Moreover, the word "snowdrops," symbolises sadness as the drooping head of the flower represents the end of life and grieving. Interestingly, snowdrops are also the first sign of new life, indicating that both Heaney and his family believe there is a life beyond the grave. Therefore, within the poem, Heaney has developed a more mature attitude to the loss of his brother and this childhood experience has enabled him to gain control of his emotions. Similarly, in "Blackberry Picking," there are once again two stages to the poem (Heaney being a child and Heaney becoming an adult.) However in this poem, these two stages are represented by the two stanzas; in the first stanza it is written from a childlike viewpoint for the simplicity of the monosyllabic rhyme, "clot" and "knot" shows vocabulary is limited, suggesting that this is narrated from the point of view of a child. Another meaning could be that the rhyming couplet portrays the excitement and desire children get from simple affairs, as the words suggests the fruits were rich and enticing to look at and taste. Adults would not see the excitement in the ripening of the fruit as they have a much more cynical outlook on life, whereas, a child is innocent and na�ve, and does not take life's simple pleasures for granted. Contradictorily, the second stanza indicates Heaney becoming an adult and that the innocence and naivety which is present as a child is starting to fade, as he realises that everything does not always happen as you would like it to. This is indicated by the final rhyming couplet, "rot" and "not." These two words portray Heaney's despair, disappointment and painful realisation that nothing will last forever. Indisputably, the contrast of the two rhyming couplets shows the change in Heaney's outlook on life, and the development of him as a person through his childhood: the first couplet showing innocence and the second showing maturity. ...read more.

However, in this poem the rhythm may also resemble the rhythm of a heart beat emphasising the presence of Mother Nature in the poem. This corresponds to the semantic field in the poem, where Heaney personifies the berries to resemble human body parts, "flesh," "blood," "tongue" and "eyes." Similarly, the poem "Digging" also contains enjambment like in "Mid-term Break." However, this time the device is used to show a time shift, "I look down/Till his..." This shows how times have changed over the years and shows the different perspectives he had as a child compared to when he is an adult. Moreover, the poem has an irregular rhyme scheme similar to the previous two poems. However, the first two verses set up an expectation that there will be a regular rhyme scheme although this changes from verse three onwards. This mirrors the way that Heaney went against the expectation in choosing to become a writer, not a farmer. Furthermore, the verses are also irregular in terms of number of lines. This irregularity reflects his fluctuating emotions in the poem (guilt to content) and also shows Heaney has broken a pattern in not following in his father's and grandfather's footsteps. Although, the first and last verse are very similar which gives the poem a circular structure, as Heaney thinks he hasn't broken the family pattern as his writing has substituted for the digging. In conclusion, from reading each of the poems, "Mid-term Break," "Blackberry Picking" and "Follower," I believe I have discovered a great deal about Heaney and his childhood. Although, his childhood experiences are different to ours today, as he was born in a different era, I can still learn from his experiences and relate them to my own life - which will help me to grow as a person. The poem I found most thought provoking was "Blackberry Picking" as the message that nothing lasts forever surprised me and made me realise that you should never take anything for granted: "Each year I hoped they'd keep, knew they would not. ...read more.