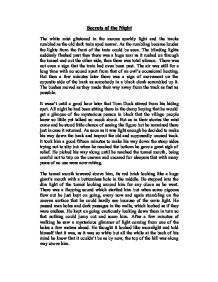 Secrets of the Night

Secrets of the Night The white mist glistened in the moons sparkly light and the tracks rumbled as the old dark train sped nearer. As the rumbling became louder the lights from the front of the train could be seen. The blinding lights suddenly flashed past then there was a huge roar as it rushed on through the tunnel and out the other side, then there was total silence. There was not even a sign that the train had even been past. The air was still for a long time with no sound apart from that of an owl's occasional hooting. But then a few minutes later there was a sign of movement on the opposite side of the bank as somebody in a black cloak scrambled up it. The bushes moved as they made their way away from the track as fast as possible. It wasn't until a good hour later that Tom Duck stirred from his hiding spot. All night he had been sitting there in the damp hoping that he would get a glimpse of the mysterious person in black that the village people knew so little yet talked so much about. But as in their stories the mist came and he stood little chance of seeing the figure but he remained there just in case it returned. As soon as it was light enough he decided to make his way down the bank and inspect the old and supposedly unused track. ...read more.

As the movement above seemed to be nearing the stairs he turned and ran back down the passage. As he reached the main tunnel he saw what, this time, was definitely moon light. He gave a sigh of relief when he reached the mouth of the tunnel as he knew he was nearly safe. He continued to make his way along the track at a brisk pace as he wanted to put as much distance between him and the tunnel as possible. Once he arrived at the path which he had used to descend to the level of the track he began to make his way up it in a hurry to reach the comfort and safety of his home and a chance to put the night behind him. He was awoken from his sleep by a loud knocking on his window. He raised his sleepy head from his pillow hoping he might get a glimpse of who had caused him to arouse from his deep and worry free sleep. A few moments later he found himself pulling on his trousers from the night before and his coat as he walked out the back door trying to find the person who had knocked on his window. When no body was there he returned to his warm kitchen and began to make himself some breakfast. Just as he reached the pan which contained his boiled eggs, there was another knock at the door, he panicked and dropped the pan on the floor, the boiling water going over his feet. ...read more.

He followed the light that he could see ahead of him. He kept tripping on the sleepers as this time he had no torch himself and his eyes were fixed on the figure ahead of him as he was determined not to lose sight of Miss McMahon. It wasn't long until he saw the figure disappear down the same passage he had been down the previous night. He hung back round the corner until he was sure that Miss McMahon had gone up the stairs. As he turned the corner into the dim passage which still had a red glow. As he looked forward he saw that the light was still covered in the red liquid but unlike the night before it was dry and of a dark red colour. He put his first foot on the bottom step, listening carefully to any noise. When he was certain he could hear no signs of movement above him he began to ascend up the stairs being careful to look around him as he went. As he put his foot firmly on the last stair he gasped. Straight ahead of him there was a light. It was flickering on and off so it didn't give of much light but the light it did give off showed something that had shocked Tom. He stood there stunned by the sight that lay in front of his eyes the eerie sound of ropes squeaking as they swung gently in the breeze, ringing in his ears. ...read more.