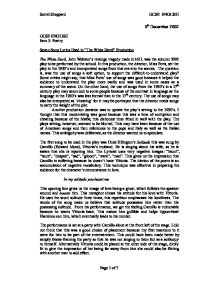 9th December 2002 GCSE ENGLISH Item 3: Poetry Seven Song Lyrics Used in "The White Devil" Production The White Devil, John Webster's revenge tragedy made in1611, was the autumn 2002 play to be performed by the school. In this production, the director, Miss Potts, set the play in the 1930's and incorporated songs from that era into the scenes. The question is, was the use of songs a soft option, to support the difficult-to-understand play? Some critics might say, that Miss Potts' use of songs was good because it helped the audience to understand the play more easily and was used in some cases as a summary of the scene. On the other hand, the use of songs from the 1930's in a 17th century play may seem odd to some people because of the contrast in language as the language in the 1930's was less formal than in the 17th century. The use of songs may also be interpreted as 'cheating' for it may be portrayed that the director needs songs to carry the weight of the plot. Another production decision was to update the play's setting to the 1930's. I thought that this modernizing was good because this was a time of corruption and cheating because of the Mafia; this dishonest time fitted in well with the play. The plays setting, however, seemed to be blurred. This may have been because of the use of American songs and then references to the pope and Italy as well as the Italian names. This ambiguity was deliberate, as the director wanted us to speculate. The first song to be used in the play was Duke Ellington's Solitude this was sung by Camillo (Edward Moss), Vittoria's husband. He is singing about his wife, as he is aware that she is rejecting him. The Lyricist uses very negative images: "haunt", "taunt", "despair", "sad", "gloom", "stare", "mad". ...read more.

We are forced to ask ourselves if resentment is genuine or is Vittoria putting on an act in order to get sympathy from her jury. This is because she has doubts that Bracciano loves her. Cole Porter tries to make later lines seem more comic by using alliteration as she mocks the supposed authorities on love: Let the poets pipe of love This could be sung in a disparaging tone as a panpipe makes a weak fragile noise. The lyricist may have wanted this feeling because underneath the exterior, the singer is not as tough as she seems. The lyricist also wants the speaker to be confident and he makes her an authority in the following lines: I've been thro' the mill of love: Old love, new love Ev'ry love but true love. These lines suggest she wears her heart on her sleeve but this is a contrast with the previous verse. She is comparing her expertise of love with the poet's meaningless words. Porter uses the idea of a mill; my original interpretation of this was of pain, because I related the mill to a flourmill where flour is ground down. The line "Ev'ry love but true love" seemed very powerful to me. It seems that Vittoria doesn't think that Bracciano love her and she is unsure which of two options should she take-to marry Bracciano and become a Duchess, although she knows that he doubted her so the marriage would be second rate, or to not marry Bracciano and be considered a whore. Everything Happens To Me, by Matt Dennis and Thomas Adair was the fifth song in the play, sung by Francisco (William Tudor). He is struggling to cope with the grief of his sister, Isabella's death. I did not think that this song worked as well as some of the others because its language was more Americanised and casual. This register of casual-conversational language does not tie in with the play or the other songs. ...read more.

Solitude does not communicate as well and Ellington gives us negative images of the character being spoken about. When we are trying to create a clear picture about the type of person singing the song we first establish who would be singing it, there is no strong gender identification, from the lyrics, in Solitude however there is a stronger sense of a man singing about a woman in Gloomy Sunday. But, it is hard to be sure because of the words used. There is a possibility that Lazlo has deliberately blurred the singer's identification because he wants it to focus the fact that the singer has become very in touch with his/her emotions because they have lost someone very close to them. Gloomy Sunday seems the more superior poem and is written in a more professional way. In Solitude it seems that Ellington, in some places, has forced the rhyme such as: Nobody could be so sad... I know that I'll soon go mad. This seems the less successful poem because this rhyme seems forced. Overall, the use of songs in the play seemed overall to carry the play quite well and they followed a theme of love leading to sadness. The play begins and ends with images of sadness, the opposite to love, I thought this was good and fitted the play well. Most of the songs seemed to be a good choice, which fitted in well with what was going on in the scene, this made the audience more aware of the characters feelings and emotions. So in answer to the question, was the use of twentieth century songs in a seventeenth century play a good choice? I would say yes, because although it may be criticized for carrying the weight of the plot I think it was needed because the play is difficult to understand. Sorrel Sheppard GCSE ENGLISH Page 4 of 7 ...read more.