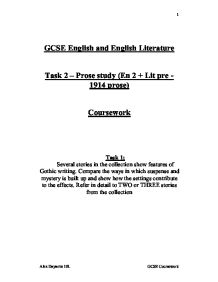 Several stories in the collection show features of Gothic writing. Compare the ways in which suspense and mystery is built up and show how the settings contribute to the effects. Refer in detail to TWO or THREE stories from the collection.

GCSE English and English Literature Task 2 - Prose study (En 2 + Lit pre - 1914 prose) Coursework Task 1: Several stories in the collection show features of Gothic writing. Compare the ways in which suspense and mystery is built up and show how the settings contribute to the effects. Refer in detail to TWO or THREE stories from the collection The stories that I have chosen for my piece of coursework are: The Speckled Band and The Red Room. I have chosen these stories as they both exhibit features of gothic writing. In this essay I hope to compare the ways in which these stories build up suspense and mystery. I also hope to compare the ways in which the settings contribute to these effects. In The Speckled Band suspense is built up by the use of descriptive language, which is used from the start. At first, the suspense is finding out about a young woman who has called on Holmes with a case for him. "It seems that a young lady has arrived in a considerable state of excitement" Tension is built up here as the woman, when offered a cup of hot coffee to stop her from shivering, replies: "It is not cold which makes me shiver," ... "It is fear, Mr Holmes. It is terror." This builds up tension and mystery, as it make the reader wonder what has made this young woman quake with fear. ...read more.

Another way in which tension is built up is at the end, with the description of Dr. Roylott. This builds tension, as every feature of him is described, starting from the feet, moving slowly up the body describing what Roylott is wearing. This creates tension, as the reader is reading this description thinking what could have happened to Roylott. When the description reaches the head, we find out what has happened to Roylott. When we find out what has happened to Roylott, all the tension in the story is dispelled and Holmes explains what has happened. The setting in The Speckled Band contributes to the mystery and the gothic style of the story. Most of the action takes place at night, in the mansion. The perimeter walls of the mansion have "unrepaired breaches". This makes the reader think that the mansion is in a state of disrepair. Also, a "dark road" led them up to the mansion. Descriptions of the setting are used to build the tension and the mysterious feeling of the place. In this story, darkness is used as a setting for all of the mysterious events that take place. Also the room, in which Holmes and Watson must stay the night in, is dark. "We must sit without a light". The setting of darkness creates more fear and tension than daytime. In The Red Room tension is built up, first by a dialogue between the strange old people who live in the house and the main character. ...read more.