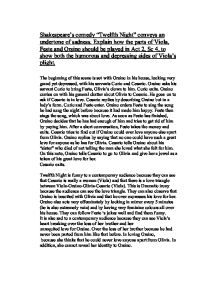 Shakespeare&amp;#146;s comedy &amp;#147;Twelfth Night&amp;#148; conveys an undertone of sadness. Explain how the parts of Viola, Feste and Orsino should be played in Act 2, Sc 4, to show both the humorous and depressing sides of Viola&amp;#146;s plight.

Shakespeare's comedy "Twelfth Night" conveys an undertone of sadness. Explain how the parts of Viola, Feste and Orsino should be played in Act 2, Sc 4, to show both the humorous and depressing sides of Viola's plight. The beginning of this scene is set with Orsino in his house, looking very grand yet depressed, with his servants Curio and Cesario. Orsino asks his servant Curio to bring Feste, Olivia's clown to him. Curio exits. Orsino carries on with his general chatter about Olivia to Cesario. He goes on to ask if Cesario is in love. Cesario replies by describing Orsino but in a lady's form. Curio and Feste enter. Orsino orders Feste to sing the song he had sung the night before because it had made him happy. Feste then sings the song, which was about love. As soon as Feste has finished, Orsino decides that he has had enough of him and tries to get rid of him by paying him. After a short conversation, Feste takes the money and exits. Cesario tries to find out if Orsino could ever love anyone else apart from Olivia. Orsino replies by saying that no one could have such a great love for anyone as he has for Olivia. Cesario tells Orsino about his "sister" who died of not telling the man she loved what she felt for him. ...read more.

He should stand up and walk around a bit, holding himself tall. This expresses his opinion on the matter. Shakespeare puts in the line "Too old by heaven" to show that Orsino has his say in everything and that his opinion should count on every matter. The spotlight should be on both Cesario and Orsino at all times, the same spotlight. As they move further apart the spotlight should separate and they should have a spotlight each. This should happen because they are having a conversation. It would be different if one of the characters were giving a speech. When Cesario says "About your years my lord" he should say it as if he was thinking what to say, this should remind the audience that Cesario is hiding his real identity from Orsino. When Orsino says "Too old by heaven," his voice should go high and shrill. Then when he carries on saying, "Let still the woman take an elder than herself" his voice should back to normal and talk as if he is giving Cesario some advice. During this line "Truly, Sir, and pleasure will be paid for one time or another." ~ Feste Feste needs to be stood up and ready to take a bow. And after the quote he should walk backwards still in a bow. The spotlight should be on Orsino and Feste during this quote because Feste is speaking but Orsino is listening. ...read more.

~ Orsino Shakespeare intended this moment to be the definite end of the scene I would enhance this by the characters actions during this moment. Orsino needs to be pulling a ring off his finger to give to Cesario. Cesario needs to respond by putting his hand out to take the ring to Olivia. Orsino needs to be rushing to do this act and to get Cesario out of the door to see Olivia. After this line, Orsino should stand up from his seat, and then go to the door with Cesario and see that he leaves the grounds towards Olivia's house. The spotlight needs to be on both Orsino and Cesario as they move throughout this quote. Then as Cesario leaves the spotlight should break. There should not be a spotlight on Cesario at this point. Only one on Orsino. Orsino 's voice should sound as though this errand was very urgent and that it should be done right away. This is because after hearing the story he thinks that he might come to an end like Cesario's "sister." Dramatic Irony is used in this play because this is what makes it entertaining. You know things that the characters do not. It makes you feel that you are keeping the secret from the characters, so you want people to know but you cannot tell them. Shakespeare uses dramatic irony, many metaphors and similes to make Twelfth Night a comedy which people from all era's of time will enjoy. By Lauren Purse ...read more.