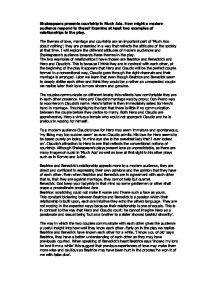 Shakespeare presents courtship in Much Ado - How might a modern audience respond to these? Examine at least two examples of relationships in the play.

Shakespeare presents courtship in Much Ado. How might a modern audience respond to these? Examine at least two examples of relationships in the play. The themes of love, marriage and courtship are an important part of 'Much Ado about nothing'; they are presented in a way that reflects the attitudes of the society at that time. I will explore the different attitudes of modern audiences and Shakespeare's audience towards these themes in the play. The two examples of relationships I have chosen are Beatrice and Benedick's and Hero and Claudio's. This is because I think they are in contrast with each other, at the beginning of the play it appears that Hero and Claudio will be the perfect couple formed in a conventional way, Claudio goes through the right channels and their marriage is arranged. Later we learn that even though Beatrice and Benedick seem to deeply dislike each other and think they would be a rather an unexpected couple we realise later their love is more sincere and genuine. The couples communicate on different levels; this reflects how comfortable they are in each other presence. Hero and Claudio's marriage was by proxy; Don Pedro was to woo Hero in Claudio's name. Hero's father is then immediately asked for Hero's hand in marriage. ...read more.

Hero would have to treat Claudio with a greater respect as he is a count and therefore has a higher status than Hero. Further restricting her from speaking freely is the fact that she has family ties. She is the daughter of an established man anything that she does will affect his name and image. As an orphan Beatrice isn't restricted by family ties, on many occasions she has shown her confidence in speech through her somewhat shrewd statements. Beatrice addresses Benedick as her equal throughout the play it is not that she is incapable of respecting men, as she addresses Don Pedro as, 'no my lord...your grace'. The manners in which Claudio and Benedick discuss Hero reflect the idea that she can be bought and is a commodity. Claudio: Can the world buy such a jewel? Benedick: Yea and a case to put it in. Although this may seem as Claudio thinking Hero too precious to be bought, but the idea of Claudio seeing Hero as a commodity is reinforced when he asks 'hath Leonato a son my lord'. We realise that Claudio's interest in Hero is not only in her looks, Hero is the only heir to Leonato she will inherit all his money, which will belong to her husband. ...read more.

Claudio requests Hero to 'give me your hand', this symbolises that they now will be part of a partnership, as the hand has previously been used to symbolise equality, trust and commitment between Beatrice and Benedick. In this play many characters are unsure that the other feels the way they say they do. Beatrice is uncertain of Benedick returning her love, when she first meets him after she has heard that he is in love with her. By the end of the play there is no denying that they truly love each other, 'here's our own hands against our hearts'. Through their hands they have proclaimed their love by the action of writing a poem, this is proof that they mean what they say. Beatrice and Benedick are echoing each other's sentiments 'they swore that you were almost sick for me', ' they swore you were wellnigh dead for me.' This reflect the harmony that they now share, she is no longer the 'infernal Ate in good apparel.' When Benedick stops her mouth with kiss some critics may argue that now she has submitted her will and will no longer talk out of turn in my opinion it symbolises the end of their 'merry war' and the start of their marriage because of the harmony that has been revealed in their last sentiments. ...read more.