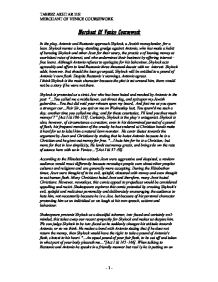 Shakespeare presents Shylock as a deceitful schemer, two-faced and certainly evil-minded, this takes away our recent sympathy for Shylock

Merchant Of Venice Coursework In the play, Antonio and Bassanio approach Shylock, a Jewish moneylender, for a loan. Shylock nurses a long-standing grudge against Antonio, who has made a habit of berating Shylock and other Jews for their usury, the practice of loaning money at exorbitant rates of interest, and who undermines their business by offering interest-free loans. Although Antonio refuses to apologize for his behaviour, Shylock acts agreeably and offers to lend Bassanio three thousand ducats with no interest. Shylock adds, however, that should the loan go unpaid, Shylock will be entitled to a pound of Antonio's own flesh. Despite Bassanio's warnings, Antonio agrees. I think Shylock is the main character because the plot is set around him; there would not be a story if he were not there. Shylock is presented as a strict Jew who has been hated and mocked by Antonio in the past "...You called me a misbeliever, cut-throat dog, and spit upon my Jewish gaberdine...You that did void your reheum upon my beard, And foot me as you spurn a stranger cur...Fair Sir, you spit on me on Wednesday last, You spurn'd me such a day; another time you called me dog; and for these courtesies, I'll lend you thus much moneys'?" ...read more.

"...An equal pound of your fair flesh, to be cut off and taken in what part of your body pleaseth me..."[Act I iii 145-146]. At the end of the play shylock is presented as an unlawful Jew who is forced to change his religion and hand over his wealth. Shylock's malicious seems to be unstoppable until finally Portia dressed as 'Bellario', points out that the bond does not mention anything about blood so that meant that if Shylock were to spill one drop of blood then all his goods and lands would be confiscated. At this point, Shylock is therefore stuck in the middle. He has only one choice as there is absolutely no way he would be able to cut a pound of flesh without shedding any blood. All Shylock's goods' and lands' are confiscated and Antonio is set free from his bond. This seems a slightly harsh punishment, but if you think about it, Shylock does actually deserve it and therefore we do not feel any more sympathy for Shylock. "...Give me my principal and let me go...I pray you, give me leave to go from hence; I am not well; send the deed after me and I will sign..." ...read more.

Again, this speech brings up the thought of whether Shylock cares about his money more than his daughter and it is plainly obvious which he cares for the most. I think Shylock is presented as a stubborn and sincere Jew but over the cause of the play he changes which in turn makes the plot change significantly, we feel sympathy for Shylock is the fact that nearly every other character in the play refers to him as "Jew" rather than by his name, Shylock. "...Hie thee, gentle Jew...and say there is much kindness in the Jew..." [Act I iii 169] but then we don't feel any sympathy when he talks about taking Antonio's flesh; "...An equal pound of your fair flesh, to be cut off and taken in what part of your body pleaseth me..."[Act I iii 145-146]. Throughout the whole play, he has quite clearly proven himself to have a vengeful nature, to be a man with a grudge, two-faced, a hypocrite, a deceitful schemer, obsessed with the law, although clever too, ill-mannered, evil, spiteful, malicious and certainly materialistic. Now we come to the conclusion which states the amount of times in which Shylock has been a sinner has tremendously over-powered the number of times when Shylock has been sinned against therefore he is definitely more of a sinner than sinned against. ?? ?? ?? ?? TABREZ AKHTAR 11E MERCHANT OF VENICE COURSEWORK - 1 - ...read more.