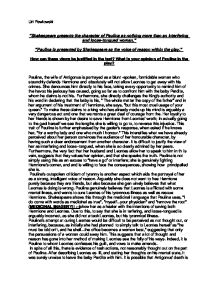 &quot;Shakespeare presents the character of Paulina as nothing more than an interfering and loose-tongued woman.&quot;&quot;Paulina is presented by Shakespeare as the voice of reason within the play.&quot;How can these views be justified in the text? What is your opinion of

"Shakespeare presents the character of Paulina as nothing more than an interfering and loose-tongued woman." "Paulina is presented by Shakespeare as the voice of reason within the play." How can these views be justified in the text? What is your opinion of Paulina in the play? Paulina, the wife of Antigonus is portrayed as a blunt-spoken, formidable woman who staunchly defends Hermione and absolutely will not allow Leontes to get away with his crimes. She denounces him directly to his face, taking every opportunity to remind him of the havoc his jealousy has caused, going so far as to confront him with the baby Perdita, whom he claims is not his. Furthermore, she directly challenges the King's authority and his word in declaring that the baby is his, "The whole matter the copy of the father" and in her argument of his treatment of Hermione, she says, "but this most cruel usage of your queen." ...read more.

Paulina is not simply using this as an excuse to "have a go" or interfere; she is genuinely fighting Hermione's corner, and and is willing to face the consequences, showing how principalled she is. Paulina's outspoken criticism of tyranny is another aspect which aids the portrayal of her as a strong, intelligent voice of reason. Arguably she does not want to free Hermione purely because they are friends, but also because she genuinely believes that what Leontes is doing is wrong. Paulina genuinely believes that Leontes is afflicted with some mental ilness, and wants to cure Leontes of his tyrannous illness as well as rescue Hermione. Shakespeare shows this through the medicinal language that Paulina uses, "I do come with words as medicinal as true", "myself...your physician" and "remove the root" (MEDICINAL IMAGERY!! :-)show her as a healer with the intentions of saving both Hermione and Leontes. ...read more.

It is possible that Antigonus' death is her punishment for this. Paulina is a majorly significant character in the play, particularly in the events of acts II & III. She acts on behalf of the passive Hermione, giving her a voice despite being locked away. Shakespeare has also made her a strong emblem for justice and reason in The Winter's Tale, evident by her justifiable opposition of corrupt authority. Arguably, without Paulina the rest of the plot would never happen as Perdita's fate would surely have been death unless she had been brought to Leontes. She is determined to "cure" Leontes' ailment and this again shows how strong willed she is when she stands up to him while his counsellors "creep like shadows by him." A necessity to the plot and a highly moral character, Paulina is the objective voice of reason, helping to bring about the redemption and catharsis in the play through her incessant, defiant pressure on Leontes, in the face of potentially severe ramifications. ?? ?? ?? ?? Uri Pawlowski ...read more.