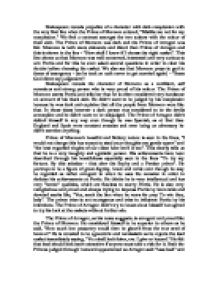 Shakespeare reveals prejudice of a character with dark complexion with the very first line when the Prince of Morocco entered, &quot;Mislike me not for my complexion.&quot;

Shakespeare reveals prejudice of a character with dark complexion with the very first line when the Prince of Morocco entered, "Mislike me not for my complexion." We find a contrast amongst the two suitors with the colour of their skin. The Prince of Morocco was dark and the Prince of Arragon was fair. Morocco is both more elaborate and direct than Prince of Arragon and this is shown in the line - "How shall I know if I choose the right casket". This line shows us that Morocco was well concerned, interested and very curious to win Portia and for this he even asked several questions in order to clear his doubts before choosing the casket. We also see that Morocco prays to god in times of emergency - (as he took an oath never to get married again) - "Some God direct my judgement". Shakespeare reveals the character of Morocco as a confident, self conscious and strong person who is very proud of his colour. The Prince of Morocco meets Portia and tells her that he is often considered very handsome on account of his black skin. He didn't want to be judged by his complexion because he was dark and explains that all the people from Morocco were like that. In those times however a dark person was considered to be the devils accomplice and he didn't want to be misjudged. ...read more.

Morocco did not approve of the word 'deserve' in the inscription of the silver casket - "who chooseth me shall get as much as he deserves". He said that he knew that he deserved Portia as he said, "I do in birth deserve her, and in fortunes, in graces, and in qualities of breeding; but more than these, in love I do deserve." He didn't want himself to be "stray'd no further" by the inscription of the silver casket as he didn't want to lose Portia. He therefore, spurns the silver, which he feels is too base a metal to hold such a beautiful woman as Portia. He thinks there is a very likely possibility in losing his "lady" if he chooses the silver casket. He considers himself to be a suitable match for Portia because he is wealthy, he has fine quality, he belongs to a noble family and he has a high position in society. He also tries to boast about his courage in the line - " to prove whose blood is redder, his or mine ". Even after all this effort to win Portia's admiration he is deceived by appearances when it comes to choosing the caskets. His choice shows that how he judges by outward appearance, not considering how the contents of the gold casket might not be indicative of its appearance. ...read more.

kind of living hell, deprived of the woman of his choice and also because he is a man not use to failing. Both of the princes were courteous, affable gentlemen who respected Portia. The Prince of Morocco is brought out to be a sole loser, as his pride disappears when he leaves saying, "I have too griev'd a heart to take a tedious leave, thus losers part." When he finds his hopes are dead, he "welcomes frost" and tries to keep up a brave and dignified appearance and we can see a contrast in the manner of his departure to the fanfare of his arrival. The departure of Arragon is similar as he said, "Still more fool I appear by the time I linger here." He had come to woo "with one fool's head but" had to "go away with two." After reading, I felt sympathy for both the suitors who had come to try their fortune and unfortunately lost. Amongst both the characters, I liked Morocco more because in the way of departure it felt to me that he had come with a true heart for Portia's love. I have more sympathy with him as he cannot marry any other woman and will have a life of a living hell as in later life he cannot share his happiness and sorrows with anyone. All the hopes he had come with were destroyed as everyone in his homeland was desperately waiting for their queen as Portia. ...read more.