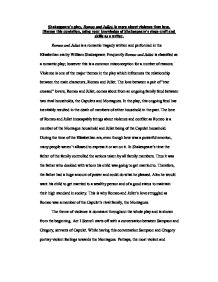 Shakespeare's play, Romeo and Juliet, is more about violence than love. Discuss this quotation, using your knowledge of Shakespeare's stage craft and skills as a writer. Romeo and Juliet is a romantic tragedy written and performed in the Elizabethan era by William Shakespeare. Frequently Romeo and Juliet is classified as a romantic play; however this is a common misconception for a number of reasons. Violence is one of the major themes in the play which influences the relationship between the main characters, Romeo and Juliet. The love between a pair of "star crossed" lovers, Romeo and Juliet, comes about from an ongoing family feud between two rival households, the Capulets and Montagues. In the play, this ongoing feud has inevitably resulted in the death of members of either household in the past. The love of Romeo and Juliet inescapably brings about violence and conflict as Romeo is a member of the Montague household and Juliet being of the Capulet household. During the time of the Elizabethan era, even though love was a powerful emotion, many people weren't allowed to express it or act on it. In Shakespeare's time the father of the family controlled the actions taken by all family members. Thus it was the father who decided with whom his child was going to get married to. ...read more.

As the play progressively becomes more violent as a theme, the love Romeo and Juliet have for one another brings them more rapidly to death and violence. The "pair of star crossed lovers" begin to deem suicide as their only choice as this will preserve their love for one another forever. This is particularly evident, for Romeo, in Act 3 Scene 3 when he has discovered his banishment from Verona and more importantly that he won't be able to see Juliet. He draws out a knife and threatens to stab himself but the Nurse snatches that dagger away. In Act 3 Scene 5, Juliet, so overwhelmed by their love, has a premonition of Romeo being dead: 'Methinks I see the now thou art so low, /As one dead in the bottom of a tomb.' The way in which the fathers acted towards their daughters in Elizabethan England is clearly demonstrated by Lord Capulet to his daughter, Juliet, in Act 3 Scene 5. Violence is clearly present in the dutiful love of Lord Capulet's and Juliet's relationship. This relationship is put in jeopardy when Juliet refuses to marry Paris, resulting in her father to become increasingly annoyed: 'Out you green-sickness carrion, out you baggage, /You tallow-face!' ...read more.

'Come night, come Romeo'. Juliet is begging and even demanding night to come. This is further shown when she says: 'So tedious is this day'. Juliet is annoyed at the day and wants night to come so she can be with Romeo. The prologue at the beginning of the play states that Romeo and Juliet are "star crossed lovers. In the Elizabethan era was believed on the movement of the stars - controls them . When Romeo believes that Juliet is dead, Romeo is upset and says "then I defy you stars." The act of Romeo is both violent as he denounces the stars and also romantic as he would kill himself to be with Juliet. He is angry that fate has not given him what he wants. Shakespeare has shown that love can be dangerous and violent as well as beautiful. He has clearly shown this by the use of language and sense of imagery he has revealed within the play. Shakespeare has left us with a powerful message: love is not always a pleasant thing, and it can cause violence resulting in perhaps death. From the view of an Elizabethan audience, they would understand it better as they were accustomed to arranged marriages. Today, we are more appalled by the tragedy, as we don't understand why Romeo and Juliet couldn't just defy their parents and be together. ?? ?? ?? ?? ...read more.