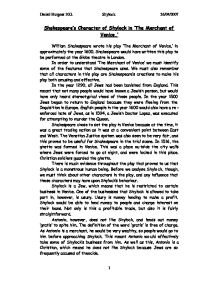 Shakespeare's Character of Shylock in 'The Merchant of Venice.'

Shakespeare's Character of Shylock in 'The Merchant of Venice.' William Shakespeare wrote his play 'The Merchant of Venice,' in approximately the year 1600. Shakespeare would have written this play to be performed at the Globe theatre in London. In order to understand 'The Merchant of Venice' we must identify some of the features that Shakespeare uses. We must also remember that all characters in this play are Shakespeare's creations to make his play both amusing and effective. In the year 1290, all Jews had been banished from England. This meant that not many people would have known a Jewish person, but would have only heard stereotypical views of these people. In the year 1500 Jews began to return to England because they were fleeing from the Inquisition in Europe. English people in the year 1600 would also have a re-enforced hate of Jews, as in 1594, a Jewish Doctor Lopez, was executed for attempting to murder the Queen. Shakespeare chose to set the play in Venice because at the time, it was a great trading nation as it was at a convenient point between East and West. The Venetian Justice system was also seen to be very fair, and this proves to be useful for Shakespeare in the trial scene. In 1516, the ghetto was formed in Venice. This was a place outside the city walls where Jews were forced to go at night, and were locked in this place. Christian soldiers guarded the ghetto. There is much evidence throughout the play that proves to us that Shylock is a monstrous human being. Before we analyse Shylock, though, we must think about other characters in the play, and any influence that these characters may have upon Shylock's behaviour. Shylock is a Jew, which means that he is restricted to certain business in Venice. One of the businesses that Shylock is allowed to take part in, however, is usury. ...read more.

He was wont to lend money for a Christian courtesy; let him look to is bond.' This shows that Shylock wants to go through with the forfeit, and wants Antonio to know that he will have what is coming to him. After Shylock has said this, Solarino asks what good a pound of flesh would be to Shylock. As Shylock is obviously prepared to take his pound of flesh, he has already thought of uses for it, and he replies: 'To bait fish withal; if it will feed nothing else, it will feed my revenge.' This also shows that Shylock is out to seek revenge over Antonio, and is willing to kill Antonio to complete his objective. Further into the scene Shylock says to Tubal something that confirms Shylock's hatred towards Jessica. In saying the following, he expresses that he would want his daughter dead so that he can have the jewels back that Jessica stole from him: 'I would my daughter were dead at my foot, and the jewels in her ear.' As well as these powerful words about his daughter, Shylock also explains how much he misses his ducats by saying: 'Thou stick'st a dagger in me; I shall never see my gold again.' In saying this, Shylock is literally asking Tubal to stab him because he can no longer bear the pain of his missing ducats. During Act 3 Scene 2, the subject of the bond arises. As Jessica is present in this scene, she contributes to the discussion. She tells the group of some things that she had heard her father talking about with Tubal, Chus, and his countrymen. Jessica's quote from Shylock further addresses his hatred towards Antonio. Jessica says: '...he would rather have Antonio's flesh than twenty times the sum that he did owe him...' This quote means that Shylock would indeed rather have the flesh than any amount of money, and that unless a court denies Shylock the permission to take the flesh, then Antonio is doomed. ...read more.

Shakespeare uses rhetorical questions with great effect in this scene, as well as during the rest of the play. Shylock asks many questions that make the audience wonder about the outcome of the trial. During the scenes that involve friendly discussion, a more informal tone is used. This is good for the audience because it will help them to understand the level of seriousness in the scene. My own evaluation of Shylock is that Shakespeare created him for one purpose: to be evil. I believe this because there is a substantial amount of evidence throughout the play that can be interpreted to support this view. I also think that Shylock deserved his punishment at the end of the trial, and that it was completely fair. I think that having Shylock as an evil man who is excluded from the pantomimesque happy ending of the play makes it a much more effective ending. In this play, Shylock was definitely created to represent all Jews, (even though there is another Jew in the play), and was created to be laughed at by the audience. We also know that Shylock is not a complete victim because he has a close friend called Tubal, with whom he freely discusses Antonio's fate. I think that there is not enough evidence in the play, even through modern interpretation, to say that Shylock is a true victim. In my opinion, it is fair to say that Shylock is definitely not funny, but he is a character who is laughed at for the way that he is treated by other characters in this play. I think that had this play been written in a modern time, it would most definitely have been banned. I believe this simply because of the extensive racism throughout the whole play, and this would certainly deem 'The Merchant of Venice' to be politically incorrect. In comparison to other plays written by William Shakespeare, for example 'Henry V,' 'The Merchant of Venice' was relatively easy to read and understand. Daniel Burgess 10G. Shylock. 26/04/2007 1 ...read more.