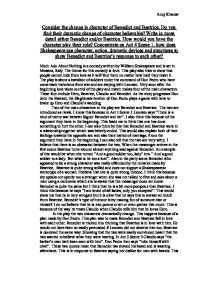 Shakespeare's Much a do about nothing - Consider the change in character of Benedict and Beatrice. Do you find their dramatic change of character believable? Write in more detail either Benedict and/or Beatrice.

Consider the change in character of Benedict and Beatrice. Do you find their dramatic change of character believable? Write in more detail either Benedict and/or Beatrice. How would you have the character play their role? Concentrate on Act 4 Scene 1. how does Shakespeare use character, action, dramatic devices and structures to show Benedict and Beatrice's response to each other? Much Ado About Nothing is a comedy written by William Shakespeare and is set in Messina, Italy. The theme for this comedy is love. This play also tries to show that people cannot hide from love as it will find them no matter how hard they resist it. The play is about a battalion of soldiers under the command of Don Pedro who have come back victorious from war and are staying with Leonato. Very soon after the beginning love takes control of the play and match makes four of the main characters. These four include Hero, Beatrice, Claudio and Benedict. As the story progresses Don John the Bastard, the illegitimate brother of Don Pedro plays a game with love to brake up Hero and Claudio's wedding. ...read more.

I think this because he says "I am loved of all ladies, only you excepted". This would show me that he is very arrogant but it is clear that he says this to answer an insult from Beatrice. Benedict's type of humour is by making fun of someone else or himself. I do not believe that he is into poems or art or even parties that much. This is because of the way he treats Claudio when Claudio tells him that he loves Hero. In the play the two characters dramatically change. This happens because of a plan made by Don Pedro. This plan was to make Benedict and Beatrice fall in love with each other. Benedict is tricked into thinking that Beatrice is in love with him. He would not have been so easily persuaded if Leonato did not deceive him too. Beatrice is deceived the same way. Showing that the two were easily convinced meant that the two wanted to believe what they were hearing. In Act 3 Scene 2 Claudio says "the barber's man hath been seen with him". ...read more.

Benedict is now very joyful. I believed that before he would find joy at other people's expense but now he is finding it to talking to Beatrice. This is because he says "By my sword Beatrice, thou lovest me". It is a very joyful thing to realise that the person you love feels the same way and Benedict is feeling joyful. This shows that he has changed a lot. In this scene Beatrice asks Benedict to kill Claudio. Benedict refuses straight away. I think that he does this because he is quite shocked; he has just told a woman that he loves her and she asks him to kill his best friend. Benedict says "not for the wide world". He is trying to say that he would never kill Claudio for anything. Eventually Benedict's mind is changed as Beatrice emotionally blackmails him. This also shows that Benedict is a lot weaker mentally in this scene. At this point in the play I see Benedict in almost the opposite way than when I saw him in the beginning. After Claudio disgraces Hero Beatrice goes into hysterics Anuj Khamar ...read more.