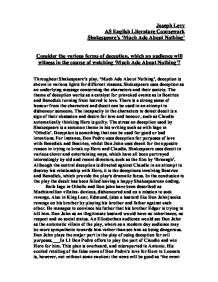 Joseph Levy AS English Literature Coursework Shakespeare's 'Much Ado About Nothing' Consider the various forms of deception, which an audience will witness in the course of watching 'Much Ado About Nothing'? Throughout Shakespeare's play, 'Much Ado About Nothing', deception is shown in various lights for different reasons. Shakespeare uses deception as an underlying message concerning the characters and their society. The theme of deception works as a catalyst for provoked events as in Beatrice and Benedick turning from hatred to love. There is a strong sense of honour from the characters and deceit can be used in an attempt to dishonour someone. The incapacity in the characters to detect deceit is a sign of their obsession and desire for love and honour, such as Claudio automatically thinking Hero is guilty. The stress on deception used by Shakespeare is a common theme in his writing such as with Iago in 'Othello'. Deception is something that can be used for good or bad intentions. For instance, Don Pedro uses deception for purposes of love with Benedick and Beatrice, whilst Don John uses deceit for the opposite reason in trying to break up Hero and Claudio. ...read more.

This is all to do with the theme of honour. Although Don Pedro, Claudio and Leonato appear to have made up their minds, the Friar has a plan from Leonato's speech. Benedick is also suspicious and is involved with the concocting of a plan to deceive people themselves. The Friar's plan is to pretend Hero has died of shock, to maybe make the accusers feel guilty and in doubt. If Hero is dead then maybe she was innocent. The audience will think the plan will work as it is a comedy, and they have experience of all the characters being somewhat gullible. Dogberry the fool somehow manages with help from the sexton to unveil some unscrupulous scheming. The truth about Hero is revealed to Leonato and he decides to continue with the plot. As the deception is put into place from the Friar, Don Pedro, Claudio, Leonato and Antonio have a chance to share their views. Leonato now doubts Claudio's accusations. There are insults thrown at Leonato by Claudio such as calling him 'an old fool'. In Kenneth Branaghs film of the play, Antonio plays the part of restraining Leonato as if he were to strike Claudio. ...read more.

The conclusion of the play is not surprisingly a happy one. Hero's reaction is very much in character. Hero is surprisingly forgiving, maybe unlike this situation nowadays. A modern day audience would sympathise a lot more. Claudio and Hero are to wed and unsurprisingly so are Beatrice and Benedick. From the start they had witty banter, which sometimes seemed to be true hatred. A modern day audience would have equality with Beatrice. Their relationship is not as sickening as that of Hero and Claudio. Deception here has brought the two together. Shakespeare makes the point clear that Don Pedro ends up alone. Beatrice rejects him early on at the masked ball and it is out of character in Shakespeare's plays to have a character end up alone. Don John is captured and left outside the community social circle just as in the beginning. He is a dark note on the celebrations and reminds us of his evil at the end of play. The play is designed so the audience are fully aware of the deception being played on each character. For this simple reason it will be amusing to an audience as they see the character fall in to the trap they have witnessed been set up. First draft; 2017 words ...read more.