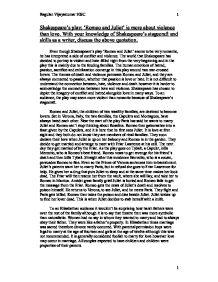 Shakespeare's play: 'Romeo and Juliet' is more about violence than love

Shakespeare's play: 'Romeo and Juliet' is more about violence than love. With your knowledge of Shakespeare's stagecraft and skills as a writer, discuss the above quotation. Even though Shakespeare's play 'Romeo and Juliet' seems to be very romantic, he has interpreted a side of conflict and violence. The world that Shakespeare has decided to portray is violent and hate-filled right from the very beginning and in the play this is mainly due to the feuding families. The human emotions of hatred, passion, sacrifice and exhilaration converge in this play around two star-crossed lovers. The themes of death and violence permeate Romeo and Juliet, and they are always connected to passion, whether that passion is love or hate. It is not difficult to understand the connection between, hate, violence and death however it is harder to acknowledge the connection between love and violence. Shakespeare has chosen to depict the imagery of conflict and hatred alongside love in many ways. To an audience, the play may seem more violent than romantic because of Shakespeare's stagecraft. Romeo and Juliet, the children of two wealthy families, are destined to become lovers. Set in Verona, Italy, the two families, the Capulets and Montagues, have always hated each other. Near the start of the play Paris has said he wants to marry Juliet and Romeo can't stop thinking about Rosaline. Romeo then gatecrashes into a feast given by the Capulets, and it is here that he first sees Juliet. It is love at first sight and they both do not know they are members of rival families. They soon declare their love when Juliet is up on her balcony and Romeo is in the garden. They decide to get married and arrange to meet with Friar Lawrence at his cell. The next day they get married of by the Friar. As the play goes on Tybalt, a Capulet, kills Mercutio, who is Romeo's best friend. ...read more.

In act three scene five there are many images of death such as "Evermore weeping for your cousin's death" which interprets the hatred going on in the play. The play also ends with violence and death. Paris mourns his bride that never was. Romeo arrives, opening Juliet's coffin to look at his love one last time. Paris fights Romeo whom he believes is desecrating Juliet's grave. Paris dies, Romeo placing him beside Juliet. After Romeo poisons himself Juliet wakes up to find him dead. Juliet kisses the now dead Romeo and stabs herself, dying. Even with so much conflict, violence, hatred and death the play is still romantic. Even before Romeo sees Juliet he is in love with Rosaline. This unrequited love puts Romeo in melancholy situation. In act one scene one when Lady Montague asks "O where is Romeo?" Benvolio replies by saying "underneath the grove of sycamore" where there is a double meaning on the word 'sycamore'. Literally this means that he is under a sycamore tree but when analysed carefully could mean love sick. Romeo is said to be mooning around refusing to play with the sunlight. He is depressed and malcontent. When Romeo and Benvolio are having a conversation Romeo explains how he is in love and how confused he is. For this Shakespeare has used several oxymorons that Romeo is made to say. "Feather of lead, bright smoke, cold fire, sick health" tells us how confused Romeo is and the feelings of love and aggression combined in a sense. Romeo soon says "With Cupid's arrow. She hath Dian's wit" where Cupid is the god of love and Dian is the god of virginity. Shakespeare has used this quote to say that the arrow is referring to the penis and the target will be the women's genital. This all shows that Romeo is miserable because he is not getting any love. ...read more.

In the Elizabethan period, a man called Boethus invented a philosophical belief in Lady Fortune. Lady Fortune controlled everyone's fate and this usually related to stars, also known as astrology. This was very popular at the time of Shakespeare and he has brought the theme of stars into his play. It is because of the stars that Romeo is distraught. In act five scene one Romeo says "Then I defy you stars", implying that it is because of the stars that Juliet has been taken away from Romeo so he is not going to give in. It was even mentioned in the prologue "A pair of star-crossed lovers take their life" suggesting that the stars and astrology has an important role in the play. This has also made us aware that Romeo and Juliet are going to die. In scene three of this act Romeo says, "Shake the yolk of inauspicious stars" suggesting that he has been subjected to a lot of misfortune and wants to get rid of the stars that cause misfortune. The fact that Romeo hates Lady Fortune causes some hatred however the fact that Romeo is willing to die for Juliet is very romantic. Shakespeare has interpreted love with violence, hatred and conflict but at the same time made it seem so beautiful. For two lovers to love each other from opposing houses is very difficult and the fact that they never gave up shows the extent to which people can go. For an Elizabethan audience the play will be quite awkward as parents, especially fathers, made decisions for their children. Children were expected to obey their parents and only marry people with their parent's consent and approval. A twenty-first century audience would understand the meaning true love and passion therefore it wouldn't be as surprising to see them disobeying their parents. However the fact that Romeo and Juliet die because of their love will be overwhelming to any audience as it is expresses the true meaning of love. 1 Ragulan Vijayakumar 10SC 1 ...read more.