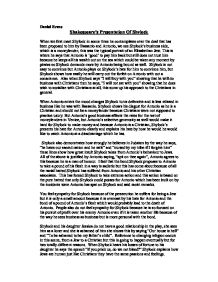 Daniel Evans Shakespeare's Presentation Of Shylock When we first meet Shylock in scene three he contemplates over the deal that has been proposed to him by Bassanio and Antonio, we see Shylock's business side, which is a moneylender, this was the typical portrait of an Elizabethan Jew. This is where he says that Antonio is 'good' to pay him back but still does not trust him because he keeps all his wealth out on the sea which could be taken any moment by pirates so Shylock demands more by Antonio being bound as well. Shylock is not easy to convince but Antonio plays on Shylock's hate for him to convince him, but Shylock shows how easily he will carry out the forfeit on Antonio with out a conscience. Also when Shylock says "I will buy with you" showing that he will do business with Christians then he says, "I will not eat with you" showing that he does wish to socialise with Christians at all, this sums up his approach to the Christians in general. When Antonio enters the mood changes Shylock turns defensive and is less relaxed in business like he was with Bassanio. ...read more.

There are not many times we feel sympathy for Shylock in this play but this speech makes you feel for Shylock this is because of the language he uses and repeats the words like human linking it with humanity successfully but when you think about it shylock is the one who wants to act out inhumanity on Antonio. Jessica has taken the one thing that only Shylock could give her and that was his love that was worth far more than all his money but he is till more concerned about the money. It is ironic and adds insult to Shylock that Jessica was assisted by a Christian and is to be married to him. You do not get the impression that Jessica thinks that shylock loves her because he never shows it to her personally but he does show it by letting her be in charge of the house and I do not think she takes this as an act of love. But this turns Shylock's thoughts towards revenge and carrying out the forfeit on Antonio by him saying "if it will feed nothing else, it will feed my revenge". ...read more.

This is because Shylock is to become a Christian which is going to be highly degrading to him as he despises of Christians and he will now beg for mercy not to change his religion as he says "give me my principal and let me go" but he was not willing to do this Antonio so why should Antonio let him get away with it. Overall Shylock is a bitter twisted man who is always out to seek revenge on Christians, especially Antonio and he uses the bond as the perfect way to get revenge on Antonio but this back fires on him and he ends up being punished for all this hate he has and ends up having to become what he despise and that is a Christian. There is also a sub plot to shylock story which is his daughter running away with his money and I feel this is because she can not show affection to him and say that she loves him because he is so full of hatred and revenge and this is why she eventually leaves. At the end of the play you would have thought that shylock realises that hatred and revenge gets you know were in life but he still does not. ...read more.