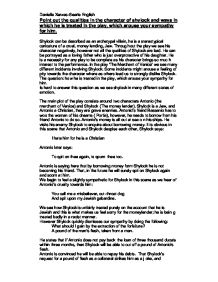 Shakespeare's The Merchant of Venice - Point out the qualities in the character of shylock and ways in which he is treated in the play, which arouse your sympathy for him.

Point out the qualities in the character of shylock and ways in which he is treated in the play, which arouse your sympathy for him. Shylock can be described as an archetypal villain, he is a stereotypical caricature of a cruel, money lending, Jew. Throughout the play we see his character negatively, however not all the qualities of Shylock are bad. He can be portrayed as a loving father who is just overprotective of his daughter. He is a necessity for any play to be complete as his character brings so much interest to the performance. In the play 'The Merchant of Venice' we see many different incidents involving Shylock. Some incidents might arouse a feeling of pity towards the character where as others lead us to strongly dislike Shylock. The question: how he is treated in the play, which arouse your sympathy for him. Is hard to answer this question as we see shylock in many different states of emotion. The main plot of the play consists around two characters Antonio (the merchant of Venice) and Shylock (The money lender). Shylock is a Jew, and Antonio a Christian, they are grave enemies. Antonio's friend Bassanio has to woo the woman of his dreams ( Portia), however, he needs to borrow from his friend Antonio to do so. Antonio's money is all out at sea on his ships. He visits his enemy Shylock to enquire about borrowing money. It is obvious in this scene that Antonio and Shylock despise each other, Shylock says: I hate him for he is a Christian Antonio later says: To spit on thee again, to spurn thee too. ...read more.

Shylock is legally entitled to a pound if Antonio's flesh however many people try to persuade Shylock to not go ahead with this: Pluck commiseration of his state However, Shylock refuses to back down, he believes that Antonio owes him the pound of flesh and therefore he should receive it. Shylock relishes in the revenge, which he is about to partake in. Here we really see Shylock as a archetypal villain: being heartless and inconsiderate. We feel no sympathy for him at all. However, our hatred towards Shylock lessens when we hear a speech recited: Hath not a jew eyes...If you prick us do we not bleed ? We again feel sorry for Shylock as he is defending himself against the prejudice he has had to deal with. Again, however, he manages to swiftly diminish any sympathy we felt by saying: And if you wrong us, shall we not revenge. By saying this Shylock automatically reverts back to the archetypical villain we saw before. It is not necessary for him to threaten Antonio in the way of revenge. As I have previously mentioned Shylock is legally allowed to receive a pound of Antonio's flesh. However, in the court a Doctor is called to verify the bond. The Doctor is in fact Portia (Bassino's wife) dressed as a man. Portia cleverly crushes Shylock by prolonging the realisation that Shylock cannot receive what he desires - the pound of Antonio's flesh. And lawfully by this the jew may claim A pound of flesh, to be by him cut off Nearest to the Merchant's heart. ...read more.

AS an audience member we would feel a great amount of sympathy for Shylock here. The way in which an actor portrays Shylock and the time in which a play is performed will dramatically influence the way in which the audience receive the character of Shylock.0 In conclusion to the essay I would say that indeed The Audience could feel sympathy for Shylock as many devastating situations occur concerning him throughout the play the play. However our sympathy is always short lived. Shylock manages to always act harshly straight after he has been treated badly, and therefore we as an audience do not feel that sympathetic towards him. However in the final incident of the play involving Shylock we are left with a feeling of sympathy towards him after his departure from the play. He has lost everything he once had. He is the archetypical villain and by being this character, the audience cannot feel sympathetic towards him for a long time. His character was written for the purpose of the audience's dislike, without him the story would be incomplete. Whichever actor performs Shylock the time in which it is performed obviously will affect the amount of sympathy in which the audience feels towards him. However, we cannot distract away from the fact that Shakespeare wanted him to be portrayed in a negative light. And however much sympathy we feel for him he is prepared to cut a pound of flesh off a man. Even if as an audience we do not see Shylock as a villain, we can never see him as a hero Danielle Xerxes-Searle English ...read more.