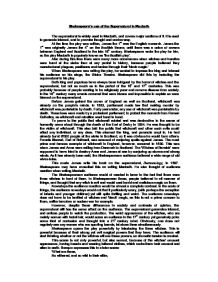 Shakespeare's use of the Supernatural in Macbeth

Shakespeare's use of the Supernatural in Macbeth The supernatural is widely used in Macbeth, and covers major sections of it. It is used to generate interest, and to provoke thought and controversy. At the time the play was written, James the 1st was the English monarch. James the 1st was originally James the 4th on the Scottish throne, until there was a union of crowns between England and Scotland in the late 16th century. Shakespeare wrote the play for him, so the play Macbeth is popularly known as 'the Scottish play'. Also during this time there were many more occurrences when witches and heretics were burnt at the stake than at any period in history, because people believed they manufactured plagues, pestilence and famine through their 'black magic.' When Shakespeare was writing the play, he wanted to impress the king and interest his audience on his stage, the Globe Theatre. Shakespeare did this by including the supernatural in his play. Both king and populous have always been intrigued by the horror of witches and the supernatural, but not as much as in the period of the 16th and 17th centuries. This was probably because of people wanting to be religiously purer and remove disease from society. In the 16th century many events occurred that were bizarre and impossible to explain so were blamed on the supernatural. Before James gained the crown of England as well as Scotland, witchcraft was already on the people's minds. In 1563, parliament made law that making murder by witchcraft was punishable by death. Forty years later, any use of witchcraft was punishable by death. These laws were made by a protestant parliament, to protect the monarch from Roman Catholics, as witchcraft and rebellion went hand in hand. To prove to the public that witchcraft existed and was destructive to the cause of humanity came about through the death of the Earl of Derby in 1594. ...read more.

As soon as the messenger leaves, Lady Macbeth starts to pray to the devil and find metaphysical aid for Macbeth. She realises that all she can do is tempt Macbeth into the murder of Duncan, and not carry it out herself: 'Come you spirits That tend on mortal thoughts, unsex me here, And fill me from the crown to the toe top-full Of direst cruelty;' The spirits Lady Macbeth is calling 'tend on mortal thoughts.' This could either mean they are the thoughts that scare human beings, or are thoughts of death. By asking the evil spirits to 'unsex' her, she wants the supernatural to remove any maternal instincts from her, which would mean she would be horrid to children and babies. By filling herself from the crown to the toe top-full of direst cruelty she is removing any kindness she has, which would terrify the audience as she would have no kindness even towards someone who had been kind to her. She would also do many other things to make sure she is ready to tempt Macbeth: 'Make thick my blood, Stop up th' access and passage to remorse, That no compunctious visitings of nature Shake my fell purpose, nor keep peace between Th' effect and it.' Lady Macbeth is telling the audience that she wants her blood curdled so the flow of vital spirits in it is stopped, and no messages may reach her heart to stir up pity. This would produce a response of disgust and fright from the audience, as she would have no remorse over killing, especially in cold blood. She does not want any natural impulses of pity to stop her from killing Duncan, her purpose. 'Come to my woman's breasts, And take my milk for gall, murd'ring ministers,' Lady Macbeth is saying that she wants her milk to be replaced by gall, whether the milk might be of 'human kindness' (act 1, scene 5, lines 15-16) ...read more.

These are equivocations, or statements said to conceal the truth. This is true as the witches would have known if Macbeth had died or not, but told him the exact opposite, to lull him into a false sense of security. This is the evil in Macbeth, the supernatural, which drove to Duncan and Macbeth's deaths. The language in Macbeth is compelling, as it is gritty and gives the characters great personalities. The language shows the witches are intelligent and devious, with their contradictory phrases and riddles. The blank verse that Shakespeare uses makes the play lyrical and attractive, and not just a lacklustre story. The language describes Macbeth's change in emotions to the audience, which is thrilling and quite dramatic. I have seen numerous variations of the play Macbeth. The language in Macbeth is so good that directors can have diverse versions, versions to suit their opinions. I have seen Macbeth in the Globe Theatre and on video by the Royal Shakespeare Company. The Globe Theatres production was low budget, so there were few special effects. The Globe version I considered slightly bizarre, as many representations that I found strange and side tracking to the story. One representation was the famous sword fight between Macbeth and Macduff at the end of the play. In the RSC's version, the sword fight is done conventionally with swords. I consider this to generate a more dramatic and keener interest in it. The Globes version was represented with pebbles signifying their lives, and a weird hand tugging that I did not understand. If I directed the play, I would have gone for a more modern approach. Macbeth could be considered just as some kind of Shakespearean current affairs representation. Because of this, I consider that the witches could have some kind of terrorist guise. Biological and chemical weapons could replace the broth. I think this would be more dramatically effective for the audience. I would also get full use out of the lighting and special effects available in a more modern theatre. ...read more.