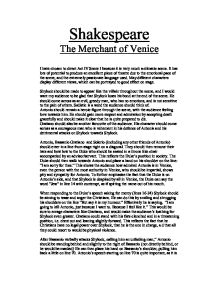 Shakespeare The Merchant of Venice - I have chosen to direct Act IV Scene I because it is very much a climatic scene.

Shakespeare The Merchant of Venice I have chosen to direct Act IV Scene I because it is very much a climatic scene. It has lots of potential to produce an excellent piece of theatre due to the emotional pace of the scene, and the extremely passionate language used. May different characters display different views, which can be portrayed to good effect on stage. Shylock should be made to appear like the villain throughout the scene, and I would want my audience to be glad that Shylock loses his bond at the end of the scene. He should come across as an evil, greedy man, who has no emotions, and is not sensitive to the pain of others. Sadistic is a word the audience should think of. Antonio should remain a heroic figure through the scene, with the audience feeling love towards him. He should gain more respect and admiration by accepting death gracefully and should make it clear that he is quite prepared to die. Gratiano should also be another favourite of the audience. His character should come across as a courageous man who is vehement in his defence of Antonia and his detrimental attacks on Shylock towards Shylock. Antonio, Bassanio Gratiano and Solerio (including any other friends of Antonio) ...read more.

These are important lines, as it highlights once more the close friendship between Antonio and Bassanio. Antonio should then hold onto Bassanio's upper arms, so that they are both holding each other. Antonio's voice should be low but heartfelt for lines 117 to 118, and he should look deeply into Bassanio's eyes. All of these actions make it a more poignant moment, and stimulates the emotions of the audience. Gratiano's rage should be demonstrated clearly lines 128-138. "O, be thou damn'd, inexecrable dog!" His voice should be loud and filled with venom, his face contorting with an expression of pure hate. Gratiano, in effect should be the voice of the audience. He should be their representative, reflecting their views. Shylock then uses the power of the law he has to further anger and provoke the Christians by saying "Thou but offend'st thy lungs to speak so loud:" He is telling Gratiano not to waste his breath. This line should be delivered in an uncaring way and with a smirk on his face. The uncaring nature shows that Gratiano's words can't hurt him, and the smirk further angers the Christians. After Portia enters and discovers who Shylock is, she attempts to persuade him to show mercy. ...read more.

She has given Shylock the chance to show mercy and he has refused it, so she wants to bring him down from his high. She can do this by having a victorious smile on her face, and by proclaiming the laws of Venice in a formal way, as if addressing a court. Gratiano can be so happy and vindictive, that he should deliver his line 310 with glee, and also irony towards Shylock because he uses words very similar to the ones Shylock uses when talking to Portia earlier. His emotions and feelings should mirror that of the audience if the scene has been successful up to now. Shylock, sensing that things are not going his way, should be stifling anger, and wanting to leave quickly. Therefore he should say his lines "I takes this offer then: pay the bond thrice, And let the Christian go," In an angry voice, with a quick pace. When Portia announces that Shylock must give his wealth to the state, Shylock should be a broken man. He should hold himself with less dignity, and seem slightly disorientated, as he should be in shock. That audience should not feel sorry for Shylock at the end of the scene, but they should not want him dead either, as they will have taken into account Shylocks speech lines 371 to 374 with an great air of self pity, but they should not forget his eagerness to murder Antonio either. ...read more.