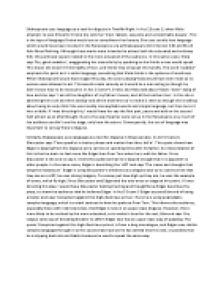 Shakespeare uses language as a tool for disguise in Twelfth Night and King Lear. Discuss

﻿Shakespeare uses language as a tool for disguise in Twelfth Night. In Act 1 Scene 5, when Viola attempts to woo Olivia for Orsino she calls her ?most radiant, exquisite and unmatchable beauty?. This is the type of language Orsino would use to compliment her beauty. She uses courtly love language which would have been mocked in the Renaissance era as Shakespeare did in Sonnet 130 and Much Ado About Nothing. Although these works were intended to attract both the educated and ordinary folk, this particular aspect related to the more educated of the audience. In this same scene, Viola says ?No, good swabber?, exaggerating her masculinity by speaking as she thinks a man would speak. ...read more.

She uses mostly monosyllabic words and simple language, but then turns it into a riddle. If I was directing this, I would have her say the first part, pause and add on the second half, almost as an afterthought. Due to the way theatres were set up in the Renaissance era, much of the audience couldn?t see the stage, only hear the actors. Consequently, the use of language was important to convey Viola?s disguise. Similarly, Shakespeare uses language as a tool for disguise in King Lear also. In Act 4 Scene 6, Gloucester says ?Thou speak?st in better phrase and matter than thou did?st?. This quote shows how Edgar is slipping from his disguise as he carries on spending time with his father. ...read more.

In Act 5 Scene 3 Edgar accuses Edmund of being a traitor and says ?Conspirant against this high-illustrious prince?. Here he is using polysyllabic, complex language, which is a stark contrast to how he spoke as Poor Tom. This informs the audience, especially those with restricted view, that Edgar is now in an upper-class disguise. However, this is more likely to be noticed by the more educated, so to make it clear for the rest, Edmund says ?thy tongue some say of breeding breaths? to affirm Edgar now has an upper class way of speaking. The quote ?Conspirant against this high-illustrious prince? is from a long monologue, and Edgar uses similar complex language through it so this could show how we he has settled into this role, or possibly that he is slipping back into old habits because he used to speak the same way. ...read more.