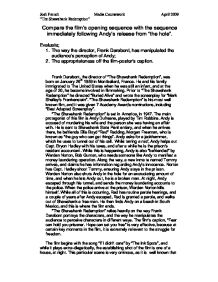 Compare the film's opening sequence with the sequence immediately following Andy's release from "the hole". Evaluate; 1. The way the director, Frank Darabont, has manipulated the audience's perception of Andy; 2. The appropriateness off the film-poster's caption. Frank Darabont, the director of "The Shawshank Redemption", was born on January 28th 1959 in Montbeliard, France. He and his family immigrated to The United States when he was still an infant, and at the age of 20, he became involved in filmmaking. Prior to "The Shawshank Redemption" he directed "Buried Alive" and wrote the screenplay for "Mark Shelley's Frankenstein". "The Shawshank Redemption" is his most well known film, and it was given 7 Academy Awards nominations, including "Best Adapted Screenplay". "The Shawshank Redemption" is set in America, in 1947. The main protagonist of this film is Andy Dufresne, played by Tim Robbins. Andy is accused of murdering his wife and the person she was having an affair with. He is sent to Shawshank State Penitentiary, and when he arrives there, he befriends Ellis Boyd "Red" Redding, Morgan Freeman, who is known as "the guy who can get things". Andy asks for a jackhammer, which he uses to tunnel out of his cell. ...read more.

In this scene, Darabont has portrayed a confident, yet strangely emotionless man, who is so sure of his innocence, he appears almost arrogant. Perhaps it is his "fear" of going to prison that makes him appear "prisoner" to his emotions and actions. In the next short scene, we see Andy's wife and her lover. The immediate contrast between Andy and Glyn is obvious; Andy is emotionless, vague, distant and impassionate, whereas Glyn looks young, cool, and passionate. In this scene, it's not obvious how it relates to the caption, but I believe that it is Andy's fear of bearing his emotions to his wife and opening up to her that holds him back, and ultimately this leads her to go looking for younger, passionate men. In this scene, Darabont portrays Andy as emotionless even to his wife, as he couldn't love her enough, or give her the attention she so badly craved. In the following courtroom scene, we again come across a vague, boring Andy, but he appears very arrogant and sarcastically says "Since I am innocent of these crimes, I find it decidedly inconvenient."1These protestations of innocence appear to be futile against the mass of evidence against Andy. ...read more.

This is because, after spending two months in the hole, Red assumes Andy has gone crazy, especially when he tells him to go to a field with a tree in it, and find something buried underneath a black volcanic rock. Throughout this scene, Darabont portrays Andy as a man that has broken and cracked, and given up hope. He wants the audience to believe that Andy has gone crazy, and is going to kill himself. However, the film's caption differs greatly from this in my opinion, because in reality, he has not given up hope of freedom, and in the end, he manages to escape. If his fear of staying in prison forever, caged up from the outside world, had taken hold of him, he would probably have taken his own life instead. In conclusion, Darabont portrays Andy in two different ways; A killer, emotionless and distant, cold hearted and jealous, as well as a broken man, stripped off his dignity, ready to end his life. The film's caption, therefore, resembles Andy's mind set, as he never gives up hope of freedom once he is in jail, but it was his fear of losing his wife and also his dignity that made him go into jail. 1 "The Shawshank Redemption" Frank Darabont 2 "The Shawshank Redemption" Frank Darabont ?? ?? ?? ?? Josh French Media Coursework April 2009 "The Shawshank Redemption" ...read more.