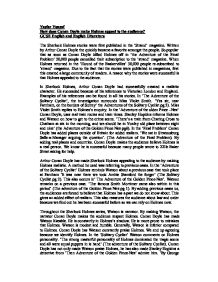 Yasfer Yousuf How does Conan Doyle make Holmes appeal to the audience? GCSE English and English Literature The Sherlock Holmes stories were first published in the 'Strand' magazine. Written by Arthur Conan Doyle the quickly became a favorite amongst the people. So popular that as soon as Conan Doyle killed Holmes off in 'the Adventure of the Final Problem' 20,000 people cancelled their subscription to the 'strand' magazine. When Holmes returned in the 'Hound of the Baskervilles' 30,000 people re-subscribed to 'strand' magazine. Due to the fact that the stories were published in magazines, first this created a large community of readers. A reason why the stories were successful is that Holmes appealed to the audience. In Sherlock Holmes, Arthur Conan Doyle had successfully created a realistic character. He succeeded because of his references to Victorian London and England. Examples of his references can be found in all his stories. In 'The Adventure of the Solitary Cyclist', the investigation surrounds Miss Violet Smith. 'Yes sir, near Farnham, on the borders of Surrey' the Adventures of the Solitary Cyclist pg 2). Miss Violet Smith replies to Holmes's enquiry. In the 'Adventure of the olden Pince -Nez' Conan Doyle, uses real train routes and train times. Stanley Hopkins informs Holmes and Watson on how to get to the crime scene. 'There's a train from Charing Cross to Chatham at six in the morning, and we should be in Yoxley old place between eight and nine' (the Adventure of the Golden Pince Nez pg6). ...read more.

So putting Watson as a narrator is a good choice. We like and admire Watson; we admire Holmes During the period when Sherlock Holmes was written, the police force was new. The public could not trust law and order yet. They needed someone they could trust. Arthur Conam Doyle created a character they felt fitted the criteria that the people wanted. Sherlock Holmes was moral, just, trusted and other truthful amongst other things. By putting Holmes as the main character, justice is always served. In the 'solitary cyclist', the villain goes jail. In the 'golden Pince-Nez', the assassin commits suicide. In the 'final problem' professor, mortirary falls off rein Bach falls. By finding the solution of the stories all the time the public trust the law and order more and more. We also find morality in the stories Sherlock Holmes is consistently trying to safeguard his vulnerable clients. Or he carries out tasks asked as a final wish. In the 'solitary cyclist' we know he is moral because he says 'it is out duty to see that no-one molests her' (the solitary cyclists pg 13) Holmes says this after Miss Violet Smith writes a letter to him. In the 'golden Pince-Nez' when the lady murderer instructs Holmes to give her the letter to the Russian embassy he actually carries them out saying 'Watson and I will drive to the Russian embassy together' (the golden Pince-Nez pg 15) ...read more.

'My sedentary life began to tell upon me and I was compelled to fall behind. Holmes however, was always in training for he had inexhaustible stores of nervous energy upon which to draw' (The adventure of the Solitary Cyclist pg8). His good physical well-being is almost like super strength making him look more like a super hero. Holmes enjoys a good challenge. We know this because Watson says in the 'Solitary Cyclist' Holmes was immensely tickled by his adventure'. (The Adventure of the Solitary Cyclist pg 7). By giving the right combination of characteristic, Conan Doyle has made Holmes the perfect person. In various scenarios, Arthur Conan Doyle creates an atmosphere to suit the situation. .This is called pathetic fallacy. We can see his use of pathetic fallacy in the 'Adventure of the Golden Pince-Nez'. 'The wind howled down Baker Street while the rain beat fiercely against the window'. (The Adventure of the Golden Pince-Nez pg 1). By using pathetic fallacy, it gives the reader an uneasy feel compelling them to read on. That is why so many people enjoy murder mysteries. The Sherlock Holmes series was written when the murder mystery genre was quite new. Created by Alan Poe murder mysteries became preferred choice amongst readers. They became popular extremely quickly because it presented the audience with the view of vicarious thrill. This is when you get scared but knows you are in no real danger. Murder mysteries are still popular today in books and television. We always see programs like C.S.I and Midsummer Murders etc. consistently become hits ...read more.