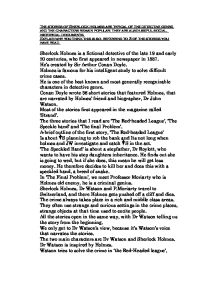 The stories of Sherlock Holmes are typical of the detective genre and the characters remain popular; they are also useful social, historical documents. Explain why you think this is so, referring to 3 of the stories you have read. Sherlock Holmes is a fictional detective of the late 19 and early 20 centuries, who first appeared in newspaper in 1887. He's created by Sir Arthur Conan Doyle. Holmes is famous for his intelligent study to solve difficult crime cases. He is one of the best known and most generally recognizable characters in detective genre. Conan Doyle wrote 56 short stories that featured Holmes, that are narrated by Holmes' friend and biographer, Dr John Watson. Most of the stories first appeared in the magazine called 'Strand'. The three stories that I read are 'The Red-headed League', 'The Speckle band' and 'The final Problem'. A brief outline of the first story, 'The Red-headed League' Is about VS planning to rob the bank and Its not long when holmes and JW investigate and catch VS in the act. 'The Speckled Band' is about a stepfather, Dr Roylott, who wants to have his step daughters inheritance. He finds out she is going to wed, but if she does, this mean he will get less money. He therefore decides to kill her and does this with a speckled band, a breed of snake. ...read more.

They all start with an outline of the crime, for example a murder or an investigation. Sometimes the criminal is obvious, but it's how the crime is commited. Holmes goes to investigate VS street in 'The Red-headed league', and he goes to Dr Roylott's mansion in 'The Speckle Band' and in 'The Empty house' he just reads the crime notes but asks a lot of questions. clues are left throughout the stories as well as red-herring, false clues, like the gypies and the cheetah. The way that Sir Arthur Conan Doyle give the clues to the reader, means that the reader can really identify with Sherlock Holmes, and begin to see themselves as the leading man. He does this by giving us, as the reader, all the clues that Sherlock Holmes gets, at the same time, and the only thing the reader has to do is work out what is happening in Holmes' mind, following where the clues are taking him, at the same time as working out what the clues mean for themselves. All of this is geared up to make the reader get inside the mind of Sherlock Holmes, and want to solve the crime. The structure and the style of the stories add tension, the readers are totally surprised at the outcome on discovering who the culprit actually is. Outcomes which are hard to predict always keeps the reader in suspense and wanting to know more are more. ...read more.

He could solve more crimes than the police could and he had a fantastic reputation with the public. Even he regularly mentioned in the books that he disapproved of the police force. The police force was stablished in 1892, they helped out but never were given any crime to solve. In the Red-headed league and in the Empty house they were just there to take the criminal away to jail. The author Conan Doyle clearly shows that he doesn't like the police force. The railway was very modern at that time and also cheap. You had to travel in class system such as first class, middle class, low class. The way they traveled tells us what class they are (upper, middle, lower). Sherlock Holmes lives in a bachulor area, we are never told that Holmes solves crime in poor areas. There were a lot of poor families Conan Doyle knew about but yet he never mentions it, the class Conan Doyle writes about is upper/middle class because they the ones that buy the strand magazine. The genre, detective stories is still popular today because they are a challenge/ reader likes to solve crime. Sherlock Holmes fits sterotype. They are well written, descripted, written time ago. They tell usabout society that some other auhors ignored e.g Charles Dickhens wrote about the scuffering. We/reader can learn from it, about the time its written in, the attitudes. e.g women were given opium to calm them down. Police force weren't invented. Women weren't allowed to go university. Railways were modern. ...read more.