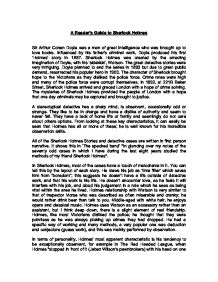 A Reader's Guide to Sherlock Holmes Sir Arthur Conan Doyle was a man of great intelligence who was brought up to love books. Influenced by his father's criminal work, Doyle produced his first 'Holmes' story in 1887. Sherlock Holmes was created by the amazing imagination of Doyle, with his 'sidekick', Watson. The great detective stories were very intriguing. Doyle planned to end the series in 1893 but due to great public demand, resurrected his popular hero in 1903. The character of Sherlock brought hope to the Victorians as they disliked the police force. Crime rates were high and many of the police force were corrupt themselves. In 1892, at 221B Baker Street, Sherlock Holmes arrived and graced London with a hope of crime solving. The mysteries of Sherlock Holmes provided the people of London with a hope that one day criminals may be captured and brought to justice. A stereotypical detective has a sharp mind, is observant, occasionally odd or strange. They like to be in charge and have a dislike of authority and seem to never fail. They have a lack of home life or family and seemingly do not care about others options. From looking at these key characteristics, it can easily be seen that Holmes has all or more of these; he is well known for his incredible observation skills. All of the Sherlock Holmes Stories and detective cases are written in first person narrative. It shows this in 'The specked band' "In glancing over my notes of the seventy odd cases in which I have during the last eight years studied the methods of my friend Sherlock Holmes". In Sherlock Holmes, most of the cases have a touch of melodrama in it. You can tell this by the layout of each story. He views his job as 'time filler' which saves him from "boredom"; this suggests he doesn't have a life outside of detective work, and that his work is his life. ...read more.

Occasionally, Watson attempts to mimic his companion's extraordinary powers of observation, but never to any great degree of success - for example, towards the beginning of The Red Headed League, when he first encountered Jabez Wilson, he "endeavoured after the fashion of my companion to read the indications which might be presented by his dress or appearance", but evidently was nowhere near as skilled at this as Holmes, as he then stated "I did not gain very much, however, by my inspection." Holmes, on the other hand, not only recognised what Watson was attempting to do, but also made a series of much better deductions from Wilson's appearance. Even though his deduction's compared to Holmes' are useless, Watson is evidently of no insignificant intelligence, having gained a medical degree himself. Moreover, he does seem to outshine Holmes in one area - socially. While Holmes appears more concerned with his investigating than with relationships, and likely to remain a bachelor, Watson is married. Arguably, Watson's most important role in narrating the stories is as someone more "human" than Holmes himself, thus enabling readers to empathise with them more than they might if they had been presented the cases through Holmes' eyes. In The Red Headed League, the villain turns out to be John Clay, who Sherlock Holmes knew about already, although in The Red Headed League he was working under the false name "Vincent Spaulding" whilst posing as Jabez Wilson's assistant. Though each of the villains was mentioned at an early stage in the story, therefore fulfilling Ronald Knox's first rule of detective fiction, Clay appeared to be the only one out of the three who was already a wanted criminal even before the crime in question took place. Besides being extremely clever and seemingly having avoided capture previously, Clay also comes across as rather big-headed, as, upon being captured, he indicates "you may not be aware that I have royal blood in my veins" and requests to be addressed politely, pointing out that despite ...read more.

He also concludes each story with a 'summing up' of how the plot has developed, and how he has been crucial to the case. In this, we find out the final resolution to the case, which we have been unaware of up until the end. It keeps the reader in suspense and makes people read the entire story just to find out the ending, which is usually different to how they imagined it, due to the red-herrings within Sherlock Holmes' adventures. Ronald Knox noted down eight guidelines for authors of detective fiction to follow, and, for the most part, the Sherlock Holmes stories follow these: the culprit is always mentioned at an early stage, the crime is always solved by examining the evidence, secret rooms and passages are sparingly used, the crime is never solved by a lucky accident, Sherlock Holmes himself was never the criminal and he didn't conceal clues from the reader, and identical twins or doubles were never used. The only one of these rules which Conan Doyle did seem to have broken in these three stories was number four; that stories "should not use any new, undiscovered or undetectable poisons". Strictly the snake's venom in 'The Copper Beaches' must fall into this category, as Holmes mentioned that it "could not possibly be discovered by any chemical test". Doyle's style was very different to that of many modern writers. Along with the occasional use of outdated words and phrases, Doyle's sentences were longer than they tend to be in more recent writing. Modern readers may find this difficult and may be uncertain of the meanings of some of the words. Yet, the Sherlock Holmes stories have remained popular throughout the century since it was first published. Personally, I enjoyed reading the stories as I like reading detective fiction, especially when it comes to interpreting the evidence and clues, and forming my own conclusions from them. ...read more.