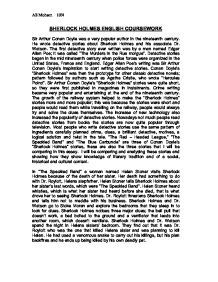 SHERLOCK HOLMES ENGLISH COURSEWORK Sir Arthur Conan Doyle was a very popular author in the nineteenth century. He wrote detective stories about Sherlock Holmes and his associate Dr. Watson. The first detective story ever written was by a man named Edgar Allan Poe; it was called "The Murders in the Rue morgue". Detective stories began in the mid nineteenth century when police forces were organized in the United States, France and England. Edgar Allan Poe's writing was Sir Arthur Conan Doyle's inspiration to start writing detective stories. Conan Doyle's "Sherlock Holmes" was then the prototype for other classic detective novels; pattern followed by authors such as Agatha Cristie, who wrote "Hercules Poirot". Sir Arthur Conan Doyle's "Sherlock Holmes" stories were quite short, so they were first published in magazines in instalments. Crime writing became very popular and entertaining at the end of the nineteenth century. The growth of the railway system helped to make the "Sherlock Holmes" stories more and more popular; this was because the stories were short and people would read them while travelling on the railway, people would always try and solve the clues themselves. The increase of new technology also increased the popularity of detective stories. Nowadays not much people read detective stories from books the stories are now quite popular through television. Most people who write detective stories use the same pattern of ingredients carefully planned crime, clues, a brilliant detective, motives, a logical solution and twist in the tale. "The Red - Headed League," "The Speckled Band" and "The Blue Carbuncle" are three of Conan Doyle's "Sherlock Holmes" stories, these are also the three stories that I will be comparing in this essay. I will be comparing and analysing these stories and showing how they show knowledge of literary tradition and of a social, historical and cultural context. In "The Speckled Band" a woman named Helen Stoner visits Sherlock Holmes because of the death of her sister. ...read more.

Whereas, people now are paid much more and with �4 you cant really buy much. The social differences in those times also show that these stories were based in the 1880's and 1890's. If you look at Helen Stoner, she was a rich woman that lived in a big house with servants. In those times rich people were considered superior to poorer people. Nowadays you wouldn't find servants working for rich people, because weather your rich or poor you have rights. The audience or readers would recognise the places named in the stories, which are all in England. The intended effect of the writer was to make the reader feel as if he or she was in the story itself, which would make it feel more dramatic. Conan Doyle achieves this by using areas in London that most people live in. Places such as "Holborn" and "Harrow". Sir Arthur Conan Doyle used very unusual titles for his stories to intrigue the reader. When a reader sees the title "The Speckled Band", he or she wouldn't think of a venomous Indian snake. The reader wouldn't know what to think, which make them want to read the story to see what "The Speckled Band" is. The same with "The Red Headed League", which is a very unusual title. The reader wouldn't think that that "The Red Headed League" was a club for read headed people who were paid �4 a week for copying the "Encyclopaedia Britannica". Conan Doyle uses these unusual titles to throw the reader off track. In "The Speckled band" Conan Doyle makes the reader think that the gypsies are the ones that killed Julia Stoner. He makes it look like all the evidence points to them. Helen Stoner says, "...perhaps to these very gypsies in the plantation. I do not know whether the spotted handkerchiefs which so many of them wear over their heads might have suggested the strange adjective which she used." ...read more.

Watson and Holmes are very dear friends and Holmes is always relying on Watson. This shows that Watson is a very reliable person. "Then put on your hat and come. I am going through the City first, and we can have some lunch on the way." This shows that Sherlock Holmes is always relying on Watson to travel with him and he always asks him to carry his gun. "Do not go asleep; your very life may depend upon it. Have your pistol ready in case we should need it." Watson is a doctor, we can tell this straight away because in the story he is called Dr. Watson. And also Sherlock Holmes talks about his patients. "Watson? Could your patients spare you for a few hours?" After reading and analysing the three Sherlock Holmes stories "The Speckled Band", "The Red Headed League" and "The Blue Carbuncle", I think I have learned a lot about detective writing in the 1880's and 1890's. I really liked reading about Sherlock Holmes; I think it is very clever how Sir Arthur Conan Doyle created him with his unique abilities. I especially like Sherlock Holmes's deducting abilities. I now no why detective writing was so popular at the end of the nineteenth century. The mysteries that Conan Doyle created were very interesting, especially the mystery of "The Speckled Band". I thought this because in the speckled band story Conan Doyle created a lot of tension which keeps building up, this made me want to read on in a faster way to find out what happened. This is how it affected me as the reader. Out of the three stories I prefer "The Speckled Band". This is because the story is much more interesting and intriguing than the other two. I like the clues that Conan Doyle created, which were really very puzzling at first. Once I got to the end of the story I understood the whole thing. The other two stories were interesting, but not as much as "The Speckled Band". ?? ?? ?? ?? Ali Mohsen 10N ...read more.