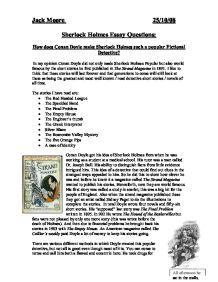 How does Conan Doyle make Sherlock Holmes such a popular Fictional Detective?

In my opinion Conan Doyle did not only made Sherlock Holmes Popular but also world famous by the short stories he first published in The Strand Magazine in 1891. I like to think that these stories will last forever and that generations to come will still look at these as being the greatest and most well known / read detective short stories / novels of all time.

The stories I have read are:

Conan Doyle got his idea of Sherlock Holmes from when he was working as a student at a medical school. His tutor was a man called Dr. Joseph Bell. His ability to distinguish facts from little evidence intrigued him. This idea of a detective that could find out clues in the strangest ways appealed to him. So he did this to show how clever he was and before he knew it a magazine called The StrandMagazine wanted to publish his stories. Henceforth, now they are world famous. His first story was called a study in scarlet; this was a big hit for the people of England. Also when the strand magazine published these they got an artist called Sidney Paget to do the illustrations to complete the stories.  In total Doyle wrote four novels and fifty-six short stories. His “supposed” last story was The Final Problem written in 1895. In 902 He wrote The Hound of the Baskervilles but fans were not pleased by only one more story (this was wrote before the death of Holmes).And then due to financial problems he brought back his stories in 1903 with The Empty House. An American magazine called The Collier’s weekly paid Doyle a lot of money to keep his stories going. 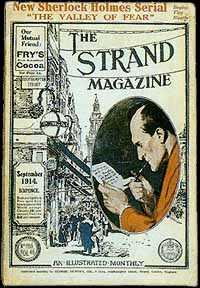 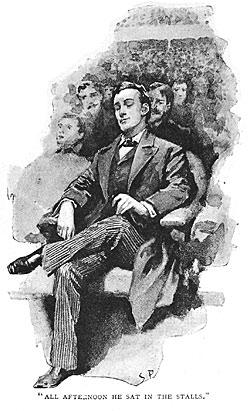 There are various different methods in which Doyle created this popular detective, but not all is good even though most of it is. You can come to terms and call him both a flawed and eccentric hero. He took drugs for starters but in those days they knew little of the damage they caused. He was sometimes bad tempered and restless which meant few people could talk to him for a period of time. He hated to be kept waiting as well so he took his own root to solving crimes going only by his own evidence. He was vein as he only knew of one other who was cleverer than him. Strangely he would go on without food or sleep which meant he was mainly antisocial. He had little care for safety as he would regularly shoot his own revolver into the door of his own flat. Consequently he also disobeyed the law breaking into other peoples houses and taking their items in which he should not have took. But he was eccentric in ways like he had a Moroccan slipper that contained tobacco and the way he likes to play and listen to the violin. Also he is famous for wearing his deerstalker hat, in which he is shown in many pictures.

The way Conan Doyle devises certain plots is ingenious. For example in The Speckled Band he makes an innocent women be murdered by the clever scheme thought out thoroughly by Dr Grimesby Roylott. This plot shows that he has an imaginative personality, one that can come up with a truly remarkable plot that nobody else could even begin to scratch upon. The key events of The Speckled Band are the ones related to the Stoke Moran. Inside Stoke Moran the scene where Holmes is in the sister’s bedroom next to the pull rope placed cleverly beside the ventilator, in which the snake slithers down to meet Holmes with a stick, is a very clever way to show a villain at work. This sparked off the snake in which rebelled against his owner and killed Dr. Roylott.  But all these settings are realistic as there is nothing in which they could make them completely fiction.

His writing is very clever as it keeps the reader in a state of suspense or curiosity throughout. This keeps the reader reading on and thinking of how the story is going to end. Without this all of his stories would not be as exciting and well read. Also his powerful descriptive writing such as “His face protrudes forwards, and is forever oscillating from side to side in a curiously reptilian fashion.”

Sherlock Holmes was given many useful skills such as his ability to solve crimes before nearly any evidence is given. He was very well educated making him able to speak several languages. Also his knowledge of fire arms is exceptionally good. He has been trained in self-defence including boxing and baritsu. He had to be physically strong and have a good stamina to be able to run after villains and capture them.

These stories would be far inferior if it wasn’t for the iconic and stereotypical villains. Here is a selection of them: Dr. Grimesby Roylott, Vincent Spaulding (a.k.a. John Clay), Colonel Lysander Stark, Beppo, Professor Moriarty, Colonel Sebastian Moran. In his stories there are different types that are all the more interesting, from tall and well built to an ordinary looking person. An example of a stereo typical villain would be Dr. Grimesby Roylott. He is well built and “so tall was he that his hat actually brushed the cross-bar of the doorway.” He also had an old wrinkled face with “deep set, bile-shot eyes.” This is very different to that of John clay that you would not pick out of the crowd and say he was a villain. Holmes describes John (a.k.a. Vincent) as “small, stout-built, very quick in his ways, no hair on his face, though he’s not short of thirty. Has a white splash of acid on his forehead” To be honest he seems like a normal person who works most likely in a science lab if he had an acid stain. This conclusion would be made by most people who had not known him beforehand. They are two completely different villains both stereotypical and a normal person (it would seem).

The Victorian setting in which they are set in is effective. It describes the gaslights in which did not light up the roads or rooms fully very well. The way they give out an eerie feel that could only be achieved by these circumstances. The way they would sit in a vigil waiting for something to happen in a dark room adds to the atmosphere. Also the Hansom cabs in which at some points Mycroft drives to assist Sherlock in some of his cases, such as The Final Problem. These specific settings show the true technology and ways of life in them days.

I think that Sherlock Holmes Stories can be both dull and very interesting. My favourite stories are The Speckled Band and Silver Blaze. Silver blaze is interesting as the crime was committed by a horse not a person. So I felt it was good to variate stories in more ways than one. A story in which I felt was slightly disappointing would be The Five Orange Pips, it happens that a man is murdered and five orange pips are posted to a gang member etc. but the ending is slightly poor. It is that the ship the murderers are travelling on is sunk and nobody knows how. I feel that if the ending was that when they arrived at their destination they saw the police waiting for them, so they hi-jacked the boat then it sunk. This would be more interesting for a story end. This concludes my essay in which I have explained the question and its answer.