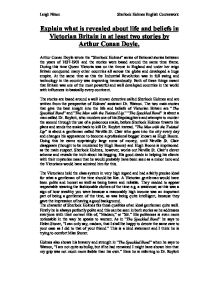 Sherlock Holmes - Explain what is revealed about life and beliefs in Victorian Britain in at least two stories by Arthur Conan Doyle.

Explain what is revealed about life and beliefs in Victorian Britain in at least two stories by Arthur Conan Doyle. Arthur Conan Doyle wrote the "Sherlock Holmes" series of fictional stories between the years of 1837-1901 and the stories were based around the same time frame. During this time Queen Victoria was on the throne in England and under her reign Britain conquered many other countries all across the globe and developed a huge empire. At the same time as this the Industrial Revolution was in full swing and technology in the country was improving tremendously. Both of these things meant that Britain was one of the most powerful and well developed countries in the world with influences in basically every continent. The stories are based around a well known detective called Sherlock Holmes and are written from the perspective of Holmes' assistant Dr. Watson. The two main stories that give the best insight into the life and beliefs of Victorian Britain are "The Speckled Band" and "The Man with the Twisted Lip." "The Speckled Band" is about a man called Dr. Roylott, who murders one of his Stepdaughters and attempts to murder the second through the use of a poisonous snake, before Sherlock Holmes thwarts his plans and sends the snake back to kill Dr. Roylott instead. "The Man with the Twisted Lip" is about a gentleman called Neville St. Clair who goes into the city every day and changes his appearance to become a professional beggar known as Hugh Boone. Doing this he earns surprisingly large sums of money, until Neville St. Clair disappears (thought to be murdered by Hugh Boone) and Hugh Boone is imprisoned as the main suspect. Sherlock Holmes, however, works out Neville St. Clair's clever scheme and reveals the truth about his begging. His good deeds in helping his clients with their mysteries mean that he would probably have been seen as a minor hero and the Victorians would have admired him for this. ...read more.

In "The Man with the Twisted Lip" the character of Neville St Clair is described as quite a wealthy man with a wife and children. It is also said that he is, "a man who is popular with all who know him." This suggests he is very polite and friendly towards others. All these things are the characteristics of an ideal gentleman in Victorian times. He also doesn't have a specific job, but it does say he is, "interested in several companies," this, and the fact that he has a very large house out in the country, both suggest that Neville St. Clair is a wealthy man who leads a respectable life. For these reasons I think the Victorians would have thought highly of Mr. St. Clair because he was a very good example of a Victorian gentleman. On the other hand, Hugh Boone is the complete opposite. He is very ugly and is described with, "a pale face disfigured by a horrible scar, which, by its contraction, has turned up the outer edge of his upper lip." This disgusting appearance added with the fact he is poor and works as a beggar would have meant that the Victorians would have looked down on him. He was a cripple, was unemployed and had no family and lacked pretty much all of the characteristics of the ideal gentleman, except for the fact he was quite witty, so he obviously had a reasonable degree of intelligence. The Victorian people might not have thought he was a bad person because they took pity on him, as we know from the fact that he earned a considerable amount of money begging. However, once they heard about his crime I think they would have viewed him as low-life scum and would have had no respect for him. In regards to giving Neville St. Clair a second chance and a fresh start after posing as Hugh Boone, I think they would have approved of it because it was the morale way to treat him, although they would probably have looked down on Neville St. ...read more.

Neville St. Clair's house is a lot better looking and is looked after a lot more than Upper Swandam Lane. The house is really big with plenty of rooms, so it obviously cost a lot of money. They also have a stable boy which shows they could afford horses. Upper Swandam Lane, however, is really dirty and cramped and the furniture in the opium den is described as being, "like the forecastle of an emigrant ship," which makes it seem really plain and basic where as the furniture in Neville St. Clair's house is all very posh and luxurious, with double beds and loads of cushions to make everything really comfortable. This shows that there was a very large financial divide between the rich and the poor and this divide was certainly a lot bigger than it is today. In conclusion, I think that both stories give a very good insight into what life was like in Victorian Britain and they show the stereotypical positions of both men and women during this time. They also show the reader how important the class system and pride and respect were to Victorians, especially to men who are seen to strive to be a perfect gentleman. However, I think the purpose of these stories was to show how Victorian people judged each other based on appearance and wealth and how they could often misjudge people based on those characteristics. The Speckled Band shows how Dr. Roylott, who was quite wealthy and born a gentleman was actually a greedy villain and The Man with the Twisted Lip shows how a lowly beggar that everyone looked down upon was also a wealthy gentleman that everyone respected and all he had done was change his appearance. So I think that both stories show that appearances can be deceiving and you shouldn't judge someone purely by their wealth or looks and I think this would have been difficult for the Victorians to comprehend because the stories show how wrapped up they were in being the ideal gentleman or lady. ?? ?? ?? ?? Leigh Nixon Sherlock Holmes English Coursework ...read more.