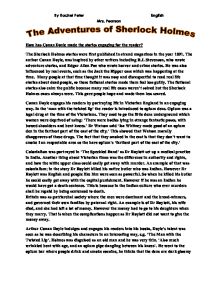 Sherlock Holmes stories. How has Conan Doyle made the stories engaging for the reader?

How has Conan Doyle made the stories engaging for the reader? The Sherlock Holmes stories were first published in strand magazines in the year 1891. The author Conan Doyle, was inspired by other writers including R.L Stevenson, who wrote adventure stories, and Edgar Allen Poe who wrote horror and crime stories. He was also influenced by real events, such as the Jack the Ripper case which was happening at the time. Many people at that time thought it was nosy and disrespectful to read real life stories about dead people, so these fictional stories made them feel less guilty. The fictional stories also calm the public because many real life cases weren't solved but the Sherlock Holmes cases always were. This gave people hope and made them less scared. Conan Doyle engages his readers by portraying life in Victorian England in an engaging way. In the 'man with the twisted lip' the reader is introduced to opium dens. Opium was a legal drug at the time of the Victorians. They used to go the little dens underground which women were deprived of using: 'There were bodies lying in strange fantastic poses, with bowed shoulders and bent knees.' Dr Watson said 'Isa Whitney made good of an opium den in the farthest part of the east of the city.' ...read more.

This is a bit like personification which gives an impression that the weather is horrible, reflecting the awful tragedy that is occurring in the house. The weather represented the mood and atmosphere of the scene in the story. The house was described as, 'the building was of grey, lichen-blotched stone, with a high central potion and two curving wings, like the claws of a crab, thrown out on each side, in one of these the windows were broken and blocked with wooden boards, while the roof was partially caved in, a picture of ruin.' The poor state of the house represents the deterioration and poor mental health of Dr Roylett. The stories are all structured in a similar way. In Sherlock Holmes stories is usually detective work it usually follows as. A client introduces the case to the detectives. In "The Speckled Band" there are two victims, one already dead, the other, Miss Helen Stoner, fearing for her life. When we first see Miss Helen Stoner in the story, she is dressed in black and heavily veiled. We can tell that she is terrified straight away when she talks. The first thing she says is "It is not cold which makes me shiver", "said the woman in a low voice". ...read more.

The mystery is not given to the audience directly for example the reader is told that Dr Roylott has a cheetah and a baboon, however they are never told that he had a snake. That is effective as it wants to make the reader read on as Conan does not just give the answers away. Also to inform the audience of the different social issues that occurred in the era. Further it shows us the police force in early stages that the police don't often solve the crimes it was mostly done by the detective. There were no forensics back then so the detectives had to work on instinct and deduction to work it out. They subjected themselves to risks that would not be allowed bin age of health and safety. The man with the twisted lip is also seemingly different its stories show negative, but amusing side of its detective work. Reading along the audience's immorality is questioned. In conclusion Conan Doyle has succeeded in making the Sherlock Holmes truly marvelous and adventurous stories full of suspense. It gives total awareness to the audience, making them know things that they never knew before. Sherlock's books draw people attention by making it mysterious which requires a lot of reasoning before reading on. ?? ?? ?? ?? By Rachel Peter English Mrs. Pearson ...read more.