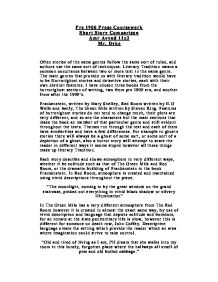 Pre 1900 Prose Coursework Short Story Comparison Amr Ayyad 11x2 Mr. Dyke Often stories of the same genres follow the same sort of rules, and authors use the same sort of techniques. Literary Tradition means a common occurrence between two or more text in the same genre. The main genres that provide us with literary tradition would have to be Horror/ghost stories and detective stories, each with their own distinct features. I have chosen three books from the horror/ghost section of writing, two from pre 1900 era, and another from after the 1900's. Frankenstein, written by Mary Shelley, Red Room written by H.G Wells and lastly, The Green Mile written by Steven King. Features of horror/ghost stories do not tend to change much, their plots are very different, and so are the characters but the main sections that make the book an member of that particular genre and still evident throughout the texts. Themes run through the text and each of them have similarities and have a few differences. For example in ghosts stories there will always be a ghost of some sort, or some sort of a depiction of a ghost, also a horror story will attempt to scare the reader in different ways it seems stupid however all these things make up literary Tradition. ...read more.

For one to rejoice at the sick made well is normal, quite the expected thing, but the person healed has an obligation to then ask why - to meditate on God's will, and the extraordinary lengths to which God has gone to realize His will." The red room has the normal supernatural goings on as you would expect, candles flickering on their own, shadows moving on their own, windows smashing open with no help from a being, Statues taking on life like personas and playing games on the characters mind and the readers. H.G Wells create his supernatural happening without actually saying to the reader there is a Ghost present, this leaves the reader guessing, is it a ghost or just coincidence, ghost could perhaps be far fetched but so is the story so it creates and equilibrium in the readers mind, this can not happen on its own say the reader. This is done by clever use of language from H.G Wells and he portrays a supernatural occurrence without blowing happening out of proportion. "I did not see the candle go out; I simply turned and saw that the darkness was there, as one might start and see the unexpected presence of a stranger. ...read more.

The build up of the story is predominant in Red Room and Frankenstein, if things happened straight away the story would not be as engaging for the reader, things have to happen over a period of time, although Red Room only takes place in one night it is still spread out correctly in order to create tension and drop and create tension again and again for the reader. So overall each book has a completely different story behind it, two were written before the 1900's and one after, however they all still manage to retain the same stylistic features, logistical way of writing to build up the story from the start and finish on and overwhelming high and the end. Each story has differences but retain the same overall features and genre requirements almost, for a ghost story there has to be a ghost of some sort, for a love story it has to be romantic in some way Each story I have chosen have similarities of some sort whether it be the time period they were written in or the time space the story takes place in, they all retain the same aspects although all turn out to be completely different stories, each with its own appeal to the reader. ...read more.